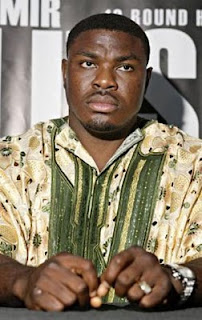 The recent awarding to Sam Peter of the ‘Interim’ heavyweight championship by the WBC following his points win over Jameel McCline brings to mind the less than satisfactory history of such arrangements.

Aesthetically, such ‘championships’ have tended not to please the senses and sensibilities of fans, but nonetheless have been used over the decades by boxing authorities as a means of striking a compromise of sorts where a champion is unable to defend his title and his ‘outstanding’ challengers are given an opportunity to stake a claim to the title while anticipating that such title will revert to the winner in the event that a champion is unable to defend in the future.

For instance, in 2006, Hasim Rahman was awarded the WBC’s interim heavyweight title after his victory over Monte Barrett and this was upgraded to the full championship following Vitali Klitshko’s retirement..

They are not new to boxing. A related species of the interim championship is that of the ‘duration champion,’ where a champion is inactive during a time of war or similar indisposition. For instance, when Sergeant Joe Louis was serving in the United States military during World War Two, the decision was made to fill the vacuum by anointing a so-called ‘Duration Champion’; an honorific duly bestowed upon Jimmy Bivins in 1943.

Similarly in 1953, when featherweight champion Sandy Saddler was drafted into the United States military, the uncertainty of the length of his stay and his availability to defend his title, caused the boxing authorities to bill a bout held in Paris between Philadelphia’s Percy Bassett and Ray Famechon as being for the ‘Interim’ title. Bassett won, but ‘lost’ the title to one Teddy ‘Red Top’ Davis. Most official records, it should be noted, do not acknowledge this ‘title.’

There have been times when the announcement of an Interim championship has tested the patience of observers. For instance, when in 1967, light heavyweight champion Dick Tiger was trapped within the flames of the raging civil war between Nigeria and his encircled Biafran nation, many frowned and fumed at the haste of Robert Evans, the president of the WBC, in announcing that Roger Rouse would take on an opponent for the Interim championship if Tiger was unable to get to American shores before a ninety-day period had elapsed from his last defence against Jose Torres.

That the so-called interim championship has been used as leverage in political chess games is beyond doubt. For example, the Mexican Jorge Arce ‘won’ and ‘defended’ his WBC ‘Interim’ flyweight championship even while the champion Pongsaklek Wonjongkam continued to defend his title.

Yet, in its unadulterated and sincere application, it strikes a prudent compromise in falling short of awarding an available championship solely on the basis of a boardroom decision as occurred in 1978 with Ken Norton being named as heavyweight champion by the WBC on the strength of a points win the previous year over Jimmy Young for what had officially been a title eliminator.

The impetus for this decision had been Leon Spinks’s decision to defend against Muhammad Ali in a return bout instead pitting himself against Norton, the designated mandatory challenger.

Instead the ‘Interim’ concept arguably attempts to keep the fighting programme well oiled in frustrating circumstances such as in the case of Maskaev’s late withdrawal and the uncertainty as to when next he will again lace the gloves. Thus it has an advantage in enabling two active and presumably highly-ranked contenders to contest a title of sorts while serving notice on the incumbent that his title will automatically revert to the winner if he is unable to defend at a date prescribed in the future.

The problem as ever is related to the politics of the moment. Are both of the contenders for such ‘Interim’ title truly the outstanding fighters of the relevant division? Or are they merely the favoured vassals of particular sanctioning bodies and promoters?

On the other hand the temptation may be to dismiss the ‘Interim’ title as just another ploy symptomatic of the modern era of proliferated and sub-divided titles. And after all, it is one of the standard cogs of the promotional aspects that television and cable outlets are loathed to give time to fights which are devoid of the appendage of some sort of a title. Any title.

In the final analysis, the concept of the interim championship clearly has its strengths in terms of its attempt to combat the potential devious or otherwise disingenuous prevarications of an existing champion and so forestall the likelihood of a championship descending into inertia. However, they have tended not to serve as the most auspicious of starts to title ‘reigns’.

The Cleveland-based Jimmy Bivins would lose a 10-round decision to Louis in 1951. In truth, the ‘Duration Championship’ was a pretty informal and insubstantial tag aptly reflected by the photograph portraying a uniformed Louis fitting a paper crown inscribed with ‘Duration Champ.’

Saddler defeated ‘Red Top’ Davis in a unanimous decision when he got out of the army, while Ken Norton lost his first ‘defence’ to Larry Holmes. Hasim Rahman succumbed to Maskaev. And Peter, who was awarded the ‘title’ before his bout, was for all intents and purposes ripe for a valid stoppage before eventually getting through McCline. Whoever happens to be the opposition in his next bout, the historical record bodes ill for Samuel Peter.