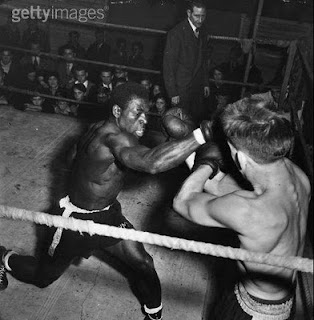 The question of sport and national identity and achievement is one which should not be underestimated. Certainly at various junctures in history, there have been events and policies linked to the perpetuation and consolidation of national spirit as well as a grandiose means of national expression in order to advertise a nation’s ascent to presumptions of grandeur.


Consider for instance the resurgent German nation under the banner of Hitlerian Fascism and its use of the 1936 Olympics as the means not only of granting a certain legitimacy to the Nazi regime among the community of nations but also as the battleground to prove the putative supremacy of the ‘Aryan’ race.


Consider also the reality of the American Joe Louis and the German Max Schemeling; boxers used as hefty metaphors in a heavyweight battle between the forces of democracy on the one hand and totalitarianism on the other. The tracks, fields, rings and arenas of Olympic games would also be used as one avenue in the battle for ideological supremacy waged by the Soviet Union and America during the ‘Cold War’ years.


Nations have utilised sports as an important fulcrum for building ‘national character’. The French very deliberately appropriated and transplanted the game of Rugby into its national fabric after studying and reflecting on the reality of the Anglo-Saxon dominance it found so threatening.


The British public school system placed an emphasis on the Grecian ideal of healthy body and healthy mind and trained its elite with a view that the expansion of their Empire and pre-eminence among the imperial powers would be predicated on such ideal. Further back in history, the newly crowned emperors of Rome sought to inaugurate their reigns by staging gladiatorial spectacles that were designed to surpass those staged by their predecessors.


Such was his thirst for recognition that the despotic leader of the then Zaire, Mobutu Sese Seko spent close to twenty million dollars in staging the famed ‘Rumble in the Jungle’ between Muhammad Ali and George Foreman in Kinshasa. Ali would later justify the expense by noting that while many nations had “got onto the map by going to war”; Mobutu had wisely chosen to stage one of his fights.


So sports matters. Whether as curriculum or as spectacle or as a focus of national pride, recognition or redemption, sports and sporting figures have been viewed and accepted as an important part of any nation’s resources as well as a reflection of its place in the world.


If it can be argued that sporting endeavour can provide a barometer of sorts in relation to the health and wealth of a country and can truly be a reflection of national character and ambition, where does this place Nigeria? Should Nigeria, with its vast human resources, not be rivalling Brazil in football, the United States in athletics or China in table tennis?


Boxing, as with other modern sports, was introduced into Nigeria via the institutions of colonialism. The military, church and the education system played their parts. Key to this development was the involvement of specific individuals who acted to develop particular brands of sports out of their love of the sport. Jack Farnsworth, an insurance manager at BEWAC for instance earned the moniker of ‘Father of Youth Clubs’ for his energetic devotion to the setting up of a system of youth organisations and amateur sporting associations through which many of Nigeria’s earliest sports stars progressed.


Farnsworth was for many years the chairman of the Nigerian Olympic and Empire Games Committees overseeing the country’s efforts in international athletic competition. Farnsworth had connections with Hogan Bassey and Dick Tiger, both of whom he part-sponsored when they embarked to Liverpool and into the managerial hands of Peter Banasko, a handler of Ghanaian descent.


Apart from Farnsworth, Douglas Collister, a manager at the United African Company also played a huge role in organising Nigerian amateur and professional boxing culminating in the establishment of the Nigerian Boxing Board of Control.


Upon the granting of independence, the Nigerian nation was expected to be in the forefront of economic development and political stability among the newly decolonised African nations. Things looked promising on the sporting front. The country had produced two British Empire (later commonwealth) boxing champions; the immortals - Hogan Bassey and Dick Tiger. Both fighters became undisputed world champions, Bassey at featherweight and Tiger at middleweight and light heavyweight.


They were two individuals among hundreds of Nigerian born fighters who plied their trade in the boxing halls and arenas of the British Isles during the 1940’s and 1950’s. The nation seemed to be on the threshold of something remarkable. But this sense of promise was not built upon. Few Nigerian boxers have come close to emulating these feats.


Why has this been the case? The reasons are multifaceted. One relates to the policy developed in the late 1960’s and early 1970’s to discourage amateur fighters from entering the professional ranks. Thus, Eddie Ndukwu, a two-time Commonwealth gold medallist at bantamweight and featherweight categories, was unable to make the impact that he arguably could have made had he turned professional at an earlier age.


The other reason, which forms the basis of recurrent national underachieving in all sport, is linked to the unsatisfactory state of the infrastructural and financial underpinnings within which boxing talent must struggle to find success.


Boxing at the amateur level requires finance from the youth to Olympic level but the standards achieved from the 1960’s to the middle 1970’s have regressed. Support has dwindled in terms of the amounts previously offered by larger companies while aid from the government has tended to be inconsistent; based on the whims and fads of incumbent politicians and apparatchiks.


Not surprisingly, the professional game has failed to thrive. A promoter who wants commercial sponsorship, despite public interest, has to work within the prevailing economic constraints. As for finance from television, the mentality here is that the promoter must pay the television company for the privilege of covering his bouts and not the other way round.


While Nigerian boxers have made inroads in world boxing, several of their campaigns have ended in disappointment and even tragedy. Dele Jonathan defeated a future world champion, Scotland’s Jim Watt, for the Commonwealth lightweight title in the middle 1970s, but his career was cut short by an eye injury sustained in a motor accident.


‘Kid’ Akeem Anifowoshe’s promising career as a super flyweight ended in 1991 after a loss to Robert Quiroga. Anifowoshe sustained a blood clot and had to fight for his life which although ostensibly saved after an operation, would come to an end three years later in Nigeria.


Although the Nigerians Herbie Hide and Henry Akinwande have both temporarily held the WBO heavyweight title, neither had what could be described as distinguished reigns. The fighter who did present Nigeria with her best chance of a potential dominating force in the heavyweight ranks, Ike Ibeabuchi, today languishes in an American prison cell serving a five to thirty year prison sentence for sexual battery and false imprisonment.


Known as ‘The President,’ Ibeabuchi is an imposing six-foot-two-inch 240 pound figure of unbridled menace. He stopped Chris Byrd, a current world champion, in five rounds and defeated the formidable David Tua in twelve highly exciting rounds during which a record number of punches were thrown in a heavyweight boxing contest.


Likened to Charles ‘Sonny’ Liston, both for his capacity to intimidate as well as his power of punch, Ibeabuchi was being earmarked to fight Mike Tyson before taking on Lennox Lewis, then the champion.


Those fighters who have carved up relatively successful careers have had to do so away from Nigeria. In many ways the ‘brain drain’ in relation to professionals is mirrored by the ‘brawn drain’ in sportsmen.


While it could be argued that many fighters regardless of nationality have to go to boxing citadels in Europe and particularly in the United States, this does not obscure the painful reality that as is the case with other sports, Nigeria does not have the financial, administrative and institutional framework to nurture talent within a stable and self sustaining environment.


There must be a reformatting of values. This must involve investment that is not merely governmental in source. There is too much reliance on the state in Nigeria and other African nations. Companies must play a part and must be convinced of the mutuality of interest between a promoter and an advertiser - albeit that things must be worked out within the context of the wider economic malaise.


The mentality must also change.


The mindset which elevates the European football leagues to a level of importance far exceeding that of the home grown league as well as the practice of exporting talented youngsters to far off lands at the expense of developing critical infrastructures and investing at home negates the possibility of advancement.


The stories of Jack Farnsworth and Douglas Collister, although British figures from the colonial era, provide a lesson in relation to the ability of individuals possessed of the requisite zeal and work ethic to make a difference. It brings to mind those Nigerians who have amassed large amounts of wealth, legitimately or illegitimately acquired, who can redeem themselves by investing in the national sports infrastructure.


It would be inaccurate to refer to a renaissance or resurgence of sporting excellence since Nigeria, in its relatively short spell of nationhood never presided over a classic period of sporting dominance. And this notwithstanding the world title reigns of Hogan Bassey and Dick Tiger.


What there was, was a sense of promise, of potential. There was progress; stultified but not irreparably stunted so long as there is a dedicated elite of persons who are imaginative, enthusiastic and courageous enough and available to nurture dormant talent and to build the institutions necessary for sustaining such talent for years to come.