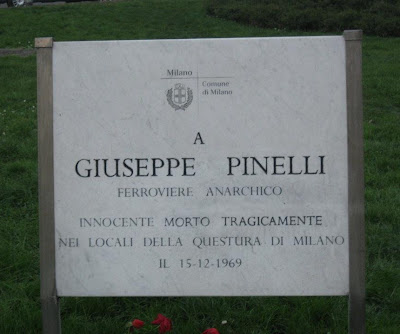 A Christmas holiday in Milan back in December 2011 while naturally stimulating me into the spirit and ethos of the aesthetic of what the Milanese refer to as La bella Figura, did not preclude me from seeking out the more serious aspects of the city’s history.

So while taking in the towering architectural and cultural achievements manifested in such creations as Duomo di Milano and La Scala as well as the high fashion consumerist paradise of the Quadrilatero d’Oro and the legendary San Siro Stadium; home to the football teams AC Milan and Internazionale, my interest in political history drew me to Piazza Fontana located about a hundred yards from Piazza Duoma.

Piazza Fontana is of course the location of the notorious 1969 bombing at Banca Nazionale dell’Agricoltura which killed 17 people and wounded 88.

The massacre was blamed on anarchists and Guiseppe Pinelli, an anarchist, who was arrested later died in police custody.

Early concerns about the conduct of the police investigation and Pinelli’s suspicious demise would be confirmed in the future when the full extent of state collusion with neo-Fascist groups in the perpetration of terrorist operations was revealed.

The bombing is now attributed to Right-wing extremist groups linked to the Gladio stay-behind network, a secret army which had been designated by NATO to fight the forces of the Warsaw Pact guerrilla style in the event of a Soviet-led invasion of Western Europe, but which shape-shifted into something quite sinister.

In concert with American intelligence operatives, this and other bombings were instigated to create a climate of fear and uncertainty in which people would call for the installation of a ‘strong’ authoritarian Right-wing government which would prevent social chaos and the possible takeover of Italy by the political Left.

The bombing is seen as the inaugural event of an overall campaign known as La Strategia della Tensione: The Strategy of Tension.

Posted by Adeyinka Makinde at 17:32