Once again there was a great spirit of conviviality amidst the gathering of boxing aficionados and collectors at Chas Taylor’s Annual Boxing Memorabilia Fayre held at the Dick Collins Hall in Camden.

I enjoyed signing copies of my biographies on Frankie DePaula and Dick Tiger in between chatting to fellow stall holders and attendees – some of whom I’ve known for over a decade through the Fayre. 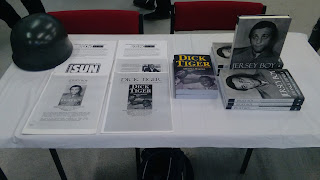 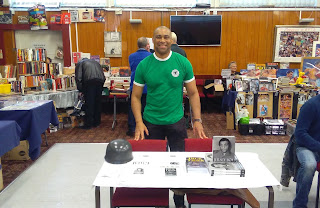 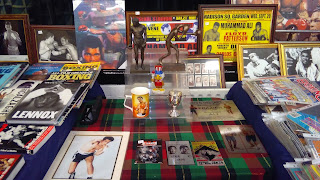 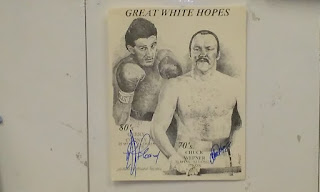 Chuck Wepner lost to Muhammad Ali in world heavyweight championship bout staged in Ohio by Don King in 1975.  He lost to Sonny Liston in a non-title bout at Jersey City’s Armory in 1970.

Here’s an interesting anecdote related to the Ali fight as told by Chuck himself.

Chuck speaking to his wife in the morning on the day of his fight with Muhammad Ali:

Honey, wear this negligee tonight cus you’re gonna be sleepin’ with da heavyweight champion of the world.

Wife speaking to a bloodied and battered Chuck after the fight:

Do I go to his room or will he be comin’ to mine now?

Gerry Cooney lost to Larry Holmes in a gruelling contest in 1981. He later suffered devastating losses to Michael Spinks and George Foreman. His most famous victory occurred when he ruthlessly stopped Ken Norton within a single round.

A nice guy who does a great deal for former fighters who are in need. I have never met him but he interviewed me on Siruis XM back in September 2010 when I was in the United States promoting my book JERSEY BOY: The Life and Mob Slaying of Frankie DePaula. 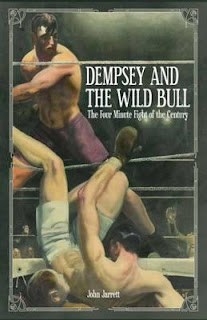 ‘Dempsey and the Wild Bull: The Four Minute Fight of the Century’ authored by John Jarrett

I wasted no time in snapping this book about the amazing brawl between the ‘Manassa Mauler’ and the ‘Wild Bull of the Pampas': Jack Dempsey, the American world’s heavyweight champion against Angel Luis Firpo, the challenger from Argentina at New York’s Polo Grounds in 1923. 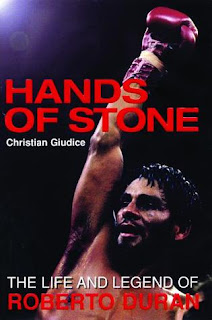 ‘Hands of Stone: The Life and Legend of Roberto Duran’ authored by Christian Guidice

It’s taken a while but I finally got a copy of the biography regarded as the definitive one of Roberto Duran: ‘Manos de Piedra’. 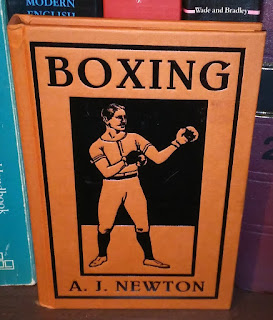 A diagram on page 53 of this book written by 'Professor' Andrew J. Newton probably indicates to one and all that the 'shoulder roll' may not have been invented by Mr. Floyd Mayweather Jr. Newton was an amateur boxing champion in the late 19th Century and certainly an Englishman of his times if his introductory exposition of the value of boxing is anything to go by:

The idea of self-defence is natural to most men. As a race, the British in particular have bred into the very bone of the mind independent, and hence on occasion, pugilistic determination. To them self-defence instinctively implies a use of the fists – boxing. A native of southern Europe in excitement or dispute flies to his knife or dagger. A wild westerner grips his six-shooter, but the Britisher, wherever you may find him, is handy with his fists in an emergency. 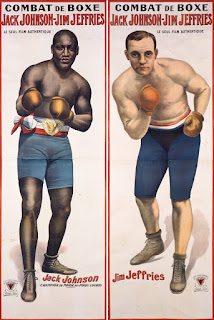 I got this fine piece of art reproduced on fine material on the first bout dubbed ‘Fight of the Century’. 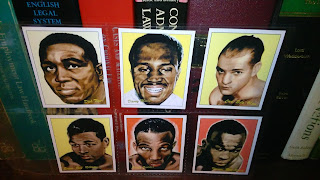 I got three of these faces wrong at first sight. The portrait of Davey Moore looks a great deal like the ‘Cincinnati Cobra’, Ezzard Charles. I mistook Carl ‘Bobo’ Olsen for Carlos Ortiz (whom I met at the Fayre back in 1998). Finally, I should be forgiven for mistaking the visage of the not well-remembered Wallace ‘Bud’ Smith for Ike Williams. 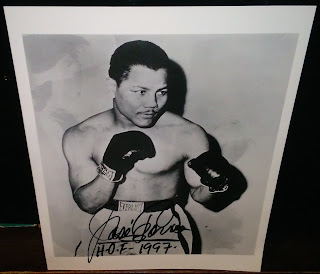 This is a signed photograph of the late Jose Torres, boxing’s renaissance man, at the time that he was inducted into the International Boxing Hall of Fame in Canastota, New York back in 1997.

I had interviewed him via trans-Atlantic telephone in the 1990s as part of my research into the life and career of Dick Tiger. He would later be part of the talking heads interviewed in the BBC World Service radio documentary on Tiger which was broadcast in 2006.

But I did meet him at the 1998 Fayre when he along with Emile Griffith, and Carlos Ortiz came to London on a fundraising mission under the auspices of New York’s ‘Ring 8’ boxing veterans association.

A very pleasant and open man who took the trouble to try to get me into a boxing dinner later that evening for free. Howie Albert, Emile Griffith’s manager, however would have none of that. But it’s the thought that counts.

I recall buying a number of boxing magazines one of which had a story on him. I got him to sign it on the page next to a picture of him. However, he became so immersed in reading it that I did not ask for it back!

Torres was a world champion pugilist turned writer. He authored one of the most highly regarded biographies on Muhammad Ali, was involved in local politics, was a boxing commissioner of New York State and the president of a world boxing organising body.

I have written an essay about his life and career for the forthcoming Cambridge Companion to Boxing which I hope will finally see the light of day next year. 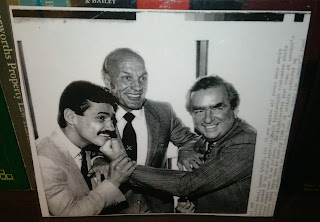 It is rather fitting that I should discover a photograph of political bruiser Denis Healy, who died last week, in a pugilist’s pose with the great Nicaraguan world champion Alexis Arguello.  Former British heavyweight champion, Henry Cooper acts as the “referee”. All were pictured at London’s Hilton Hotel for a Variety Club of Great Britain tribute lunch for Cooper.

It will be back next year on the 15th of October. Same venue, same time.