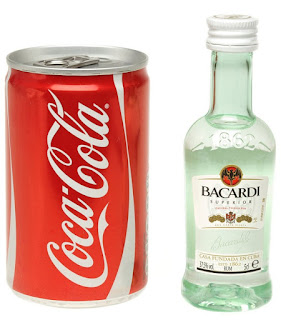 A can of Coca Cola and a bottle of Bacardi
It would be verging on the pretentious of me to speak of apéritifs and digestifs since I know too little of either. Didn't listen much when my father spoke of the former. I mean I had to watch 'From Russia, With Love' to understand the distinct matches between red wine and white wine with meat and fish respectively.


But on this point there is dissent.


Slavish insistence on such distinction alongside an attitude condemning the non-conformist to the disapprobation of 'right-thinking' members of society culminating into social ostracism may safely be said to be the sole preserve of utopian pedants and incorrigible mystics.


I indulge little with alcohol save for irregular bouts of wine drinking, but during the festive season I have tended to be partial to the consumption of a rudimentary mixture of Bacardi and Coca Cola.


For me, I guess, it serves as an apéritif, a digestif and an in-between meal drink over the festive period. It goes down well with home cooked Christmas turkey, servings of cold chicken left-overs and New Year's Day's lobster feast.


Here's to festive drinking alongside the choices of cuisine during the holiday season. ((CLINK)).

Posted by Adeyinka Makinde at 15:31