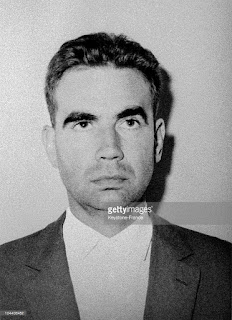 Lawyer: For heaven’s sake man; don’t you realise you are going to be shot?
Prisoner: You don’t understand. No French soldier is going to raise his rifle against me.


The aforementioned conversation between a French lawyer and a condemned prisoner takes place in a cell after a plea for clemency to France’s highest court has been turned down. It forms part of the formative scenes in the 1973 film adaptation of Frederick Forsyth’s bestselling novel The Day of the Jackal.


Those who have watched the movie know the very next frame. In it they see the same prisoner tied to a stake and standing forlornly as six helmeted soldiers composing a firing squad stand to attention as they face him. Then, reacting in synchronized precision to orders being bellowed, they take hold of their rifles, aim and fire. The figure, who is not blindfolded, slumps downwards.


As the scene continues with a soldier stepping forward to administer one final shot to make sure of a corpse, a radio news announcer starts with the following:


Here is the eight o’clock news for today the eleventh of March 1963. An hour ago in the courtyard of the Fort D’Ivry outside Paris, Lieutenant-Colonel Bastien-Thiry was executed by firing squad for leading the attempt on the life of General de Gaulle last August.


It is a faithful recreation of real life events including the scene dealing with the ambush of de Gaulle’s small motorcade as it sped down a quiet street in the Parisian suburb of Petit Clamart.


There is no evidence that Bastien-Thiry actually claimed that no French soldier would “raise his rifle against me” although after his trial and sentence, a voice from the audience in court had shouted much the same.


Jean-Marie Bastien-Thiry was at the time of his death a 35-year-old military weaponry engineer. He was a pious Catholic who was married with three young daughters.


Although technically not a member of the Organisation de l’Armee Secrete or O.A.S., -he is claimed to have been associated with a group named ‘Vieil Etat-Major’- he was involved in at least one attempt on the life of de Gaulle prior to the Petit Clamart incident.


He was among those in the French military who considered de Gaulle’s support for Algerian independence a cardinal betrayal. When in 1958 de Gaulle had been roused out of retirement to assume the mantle of president under the 5th Republic, he had pledged to definitively resolve the ‘Algerian problem’. France as he told the French Assembly was “threatened with dislocation and perhaps civil war”. In a speech in Mostaganem, Algeria on 6th June 1958, he had exclaimed in an encore to the crowd the words: “Vive l’Algerie Francaise”.


Four years later, the Evian Accords were signed and referenda held in both France and Algeria to bring to a denouement the inexorable drift of a policy towards granting independence to Algeria.


The brutal war waged against the Front de Liberation Nationale (F.L.N.) had sapped a great deal of French morale and prestige. It was also acting as a drain on the national treasury.


Those who banded together to form the O.A.S. swore to kill de Gaulle in revenge. Bastien-Thiry for his part also developed homicidal feelings toward the ‘saviour of France’ justifying this on St. Thomas Aquinas’ concept of tyrannicide.


Students of the history of the O.A.S. insurgency and its aftermath are aware that most of its members who were caught and tried were not condemned to death. General Raoul Salan who had led the putsch in Algiers in 1961 for instance had his death sentence commuted to life imprisonment.


There are indications that de Gaulle had been minded to sanction clemency in regard to Bastien-Thiry but after the trial he made an about turn; basing his refusal to grant clemency for the following five reasons enumerated upon by his son-in-law Alain de Boissieu:


1. Bastien-Thiry had directed his subordinates to fire on a car in which there was an innocent woman present; namely Madame Yvonne de Gaulle.


2. He had endangered civilians –the Fillon family- who had been travelling in a car near to that carrying de Gaulle.


3. He had brought foreigners –three Hungarians- into the plot.


4. Bastien-Thiry had mocked de Gaulle during the trial. After claiming that he and his cohorts had not intended to kill de Gaulle but to kidnap him and try him by a special court, he had stated that de Gaulle would have been confined by merely taking away his spectacles and braces.


5. Mostly serious of all from de Gaulle’s perspective was that while the other conspirators in the Petit Clamart incident had opened fire and thus placed themselves in a certain amount of danger, Bastien-Thiry had overseen events acting only as the lookout to signal the arrival of de Gaulle’s entourage by waving a newspaper.


De Gaulle refused pleas for clemency from Bastien-Thiry’s father who was a contemporary of his. Said de Gaulle:

The French need martyrs… They must choose them carefully. I could have given them one of those idiotic generals playing ball in Tulle prison. I gave them Bastien-Thiry. They’ll be able to make a martyr out of him. He deserves it.

Posted by Adeyinka Makinde at 19:03