Wilder-Stiverne: A Tale of Collusion and Chaos 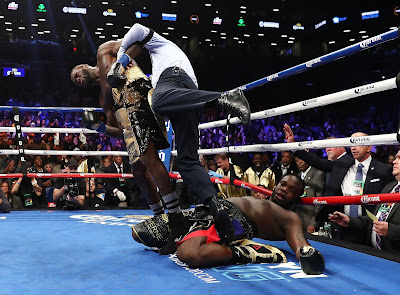 The outcome of the recent WBC world heavyweight title bout between Deontay Wilder and his challenger Bermane Stiverne provided the drama of a first round knockout that has provided the impetus for a ratcheting up of interest in a unification bout between Wilder and Anthony Joshua, the holder of the WBA and IBF versions. But the fight, as well as providing a reminder of the perpetually fractured nature of world championship boxing, also raised a number of disquieting issues. First was the legitimacy of Stiverne’s entitlement to challenge for Wilder’s title. Second was the disgraceful physical state of the challenger who weighed in at 254 pounds. Thirdly, is the question of whether on his thirty-ninth appearance in the ring, Wilder’s level of skill is befitting of one bearing the mantle of a world champion. Finally, was the quality of officiating. Lost in the post-fight inquest was an appropriate level of scrutiny of Arthur Mercante Jr’s all too often chaotic style in the ring.


Very few, if any, among the followers of the sport of boxing were overjoyed at the prospect of Bermane Stiverne’s challenge to Deontay Wilder for the latter’s version of the world heavyweight title. In the first instance, Stiverne, the 39-year-old Haitian-Canadian from whom Wilder had won the title in 2015, had been a replacement for the Cuban Luis Ortiz, whose eagerly anticipated clash with Wilder had been derailed by a positive doping test. But before that, aficionados of the sport had expressed concern about Stiverne’s designation as the number one contender for Wilder’s World Boxing Council title given Stiverne’s relative inactivity during the period that had elapsed since his loss to Wilder.


That Stiverne, who had only fought once against journeyman fighter Derric Rossy in November of 2015, could maintain his mandatory status was almost certainly due to the influence of his manager, Don King. King had a close and enduring relationship with the late Jose Sulaiman, the longstanding president of the WBC who was the father of the current president Mauricio Sulaiman. The King-WBC ‘special relationship’ is one that appears to be transgenerational.


The original relationship with Sulaiman Snr was much derided by journalists, rival promoters and managers of fighters who were opponents of Don King-controlled boxers. The late Jack Newfield once lamented that Sulaiman “became more King’s junior partner than his independent regulator.”


While the grip King once had on heavyweight boxing has long been weakened to one that is largely insignificant, many with memories of the King-Sulaiman Snr. ‘partnership’ would be forgiven for their angst at the apparent special treatment given to a contemporary Don King fighter.


Many fans were irritated at the initial resistance shown by Stiverne to take stand-aside money to pave the way for the intended fight between Wilder and Ortiz. The overwhelming consensus was that Stiverne had been beaten comprehensively on points and there was no interest in seeing both men fight again.


Despite Stiverne’s pre-fight threat that he would “kill” Wilder, it was apparent that he was an unworthy challenger given his pot-bellied and generally out-of-conditioned appearance. Indeed, for some, Stiverne’s poorly conditioned frame and lacklustre performance were redolent of the era of overweight and out-of-condition heavyweights of the late 1970s and 1980s, an era dominated by King.


Wilder’s blow-out of Stiverne earned him praise from some quarters including Mauricio Sulaiman who claimed that he had not seen a heavyweight “throw a jab with such sharpness and precision since Larry Holmes.” Others are not so convinced about the level of his ringcraft, contending that Wilder’s modus operandi of throwing his jab low, seemingly from the hip, would be courting disaster against a better class of heavyweight such as Anthony Joshua. And while one of Wilder’s knockdown punches, a straight right that pierced the guard of Stiverne, caught the eye, his overly excited finish composed of wild swinging blows underlined what to some is a champion who remains crude and unlettered in the finer aspects of the sport. The ‘punch stats’ seemingly bear this out: Wilder landed 15 out of 39 punches thrown during the bout.


There are complaints that while Joshua’s title win over Charles Martin was received with caution because he had defeated a decidedly mediocre opponent, Wilder has been serenaded for dispatching a hapless and inept excuse for an ex-champion.


Apart from questions associated with the making of the fight and the quality of the fight -at least in so far as the competence of Stiverne was concerned, is the performance by referee Arthur Mercante Jr.


It was not merely that Mercante’s longstanding habit of whistling at boxers when signalling for them to resume fighting infringes fundamental notions of professionalism and respect for the combatants, he clearly breached a number of rules and conventions governing the officiating of bouts in the jurisdiction of New York State.


Mercante is no stranger to playing roughshod with both the letter and the spirit of the rules of the game. In 2010, he ignored the pleas of Yuri Foreman’s corner to have the fight stopped and admonished an inspector of the New York State Athletic Commission who had begun to climb the steps to the ring in the eighth round, the round before he stopped the bout. Inspectors have the right to implore a referee to stop a fight.


The ‘innovation’ of a flexible count was not the only infraction.


The standard of practice promoted by the New York State Athletic Commission is that after a knockdown, the downed fighter once upright, at the behest of the referee is expected to take a step forward followed by a step to the side. But Mercante failed to insist that Stiverne take a step to the side. Further, he neglected to keep a firm control on Wilder’s movements after the knockdowns while he was administering the count.


The underlying current of chaos was exemplified by the incident before the final knockdown when Stiverne collided with him as Mercante stood near the ring ropes. This arguably may have delayed Stiverne’s descent and allowed Wilder to connect with more punches than he otherwise would have. In any case, when stopping the fight, Mercante’s act of grabbing Wilder and grappling with him after he was already turned away from the prone Stiverne was unnecessarily theatrical.


Mercante’s longevity in the topflight continues to mystify many who bemoan the controversies and even tragedies that have been associated with poor levels of refereeing - this all the more galling when there is a pool of highly professional officials available, including the veteran Ron Lipton whose talents have been remarkably underused by the authorities in New York.


At a time when boxing is facing competition from the genre of mixed martial arts, the Wilder-Stiverne bout highlights the disquieting features attendant to the sport that only serve to undermine it: shady behind-the-scenes administration by the sanctioning bodies in collusion with promoters, which result in mismatches that demean the prestige of bouts offered to the public as being between combatants at the pinnacle of the sport. That, as well as the evident favouritism shown to certain referees whose levels of competence and professionalism do not stand the test of objective evaluation.