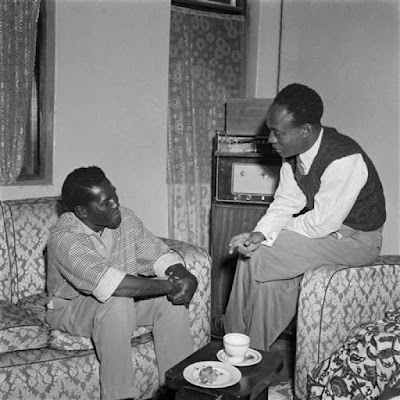 Roy Ankrah (Left) the featherweight champion of the British Empire with Dr. Kwame Nkrumah, leader of the independence movement of the Gold Coast which later became Ghana. (CREDIT: James Barnor)

African boxing and boxers merged into the consciousness of the different societies fighting for liberation from colonial control and as such the careers of the most successful ones became entwined with the nationalist sentiments of the day as the connection between Roy Ankrah’s British Empire title win and Kwame Nkrumah’s release from British detention showed.


- Excerpt from “The Africans: Boxing and Africa” by Adeyinka Makinde, Chapter 8 of the Cambridge Companion to Boxing.