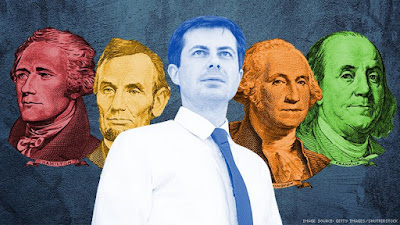 I think that I have something of a head-start over others, including many Americans, so far as the Democratic presidential aspirant Pete Buttigieg is concerned. As one who takes note of a wide range of figures on what is termed the ‘alternative media’, I am quite familiar with the philosophy and the views of E. Michael Jones, a Catholic conservative, who is a long-term resident of South Bend Indiana, which is Buttigeig’s hometown.

Jones has been absolutely scathing about Buttigieg’s persona, as well as his record as mayor. And even if one removes the fact that Buttigieg’s homosexuality is a central reason for Jones’ hostility, there is a coalescence of analysis between the right-wing Jones and the left-wing humourist Jimmy Dore, who is an astute commentator on America’s domestic politics as well as on geopolitical issues.

To Dore, Buttigieg’s image of a down-to-earth, sleeves-rolled-up operator is one sign of a guy who is “trying too hard”. In fact, noted Dore in a recent episode of his youtube show, “he’s trying too hard to make it look like he’s not trying.” But while Dore’s analysis is based on what he can garner from Buttigieg’s performance in the media now that he is in the national spotlight, Jones has over the last few years incessantly spoken in detail about Buttegieg’s record as mayor, during which time he has succeeded in alienating large sections of the population of South Bend.

Buttigieg’s formula of “practical leadership guided by progressive values” has been subjected to devastating criticism by those familiar with his 9-year mayoral record in South Bend.

One example relates to Buttigieg’s decision to phase out the city’s trash collecting regime for cost-cutting purposes. Previously, a two-man team would drive down residential alleys to retrieve refuse bins, but the new design trucks cannot fit through most alleys which means that residents have to put out their garbage in the front of their homes, a situation which has led to bouts of odour infestation and a ‘rough’ looking appearance on collection days. Buttigieg’s decision was not a practical one, given the lack of diligence in researching the replacement trucks. And although more modern in appearance and facility, the laying off of many refuse collectors -many of whom were from minority backgrounds- added to the city’s unemployment figures.

Buttigieg’s decision to sack South Bend’s popular black police chief Darryl Boykins, is also viewed as a disastrous move. It was a move which he has admitted was his “first serious mistake as mayor”. His claims to have been “troubled” by Barack Obama’s clemency for Chelsea (nee Bradley) Manning, who exposed US war crimes, as well as his praise of Israeli security measures as being “moving” and “clear-eyed”, despite the fact that he was on a visit to the country last May when Israeli Defence Force snipers were shooting unarmed Palestinian protesters, do little to convince observers that he can genuinely be called a progressive. Indeed, there is little of the vocabulary or deeds associated with progressive politics in Buttigieg such as relates to social justice and employee rights.

Buttigeig has also been called out for his tendency to narcissism. A measure of his self-obsessed persona can be garnered from the fact that his book Shortest Way Home devoted more words to his recollection of his playing piano on “Rhapsody in Blue” with the South Bend Symphony Orchestra than on the issue of social poverty.

The marketing of American political aspirants has become more sophisticated from the time when strategizing his son John’s campaign for the White House, Joe Kennedy Snr. said “we’re going to sell Jack like soap flakes”. Becoming president not only involves utilising the modern innovations of Madison Avenue, it also entails brokering deals with the establishment who have ensured that whoever is elected as the latest saviour of the nation is nonetheless a captive of their overarching policies. No objective observer, for instance, can fail to note the fundamental continuum by Donald Trump of a foreign policy followed by Barack Obama who carried on from where George W. Bush left off.

To get straight to the point: ‘Mayor Pete’ is a creature of the oligarchs; a so-called ‘progressive’ who is really a hardline conservative on many issues. A man who is being moulded and sold to America by a number of the people who were behind the meteoric rise of a certain senator named Barack Obama.

It will be useful to bear this in mind were Pete Buttigieg to defy the odds by becoming president of the United States.