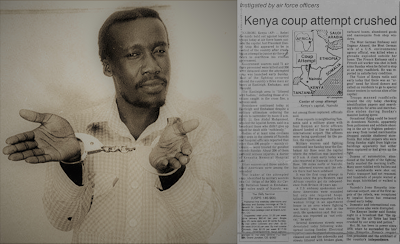 . The backdrop to the coup related to dissatisfaction in the military which centred on the air force. There was low morale and tribally motivated grievances.

. The wider background was of declining living standards in Kenya with an increasing population size causing strains on urban resources and attendant high figures of unemployment, underemployment and crime.

. Both Kenyan Special Branch and Kenyan Military Intelligence were aware of a brewing mutiny.

. The mutiny kick-started in a chaotic and uncoordinated manner with bursts of gunfire unleashed by airmen at the air base within the old Embakasi Airport which is near Eastleigh Air Force Base. Both were taken over by the mutineers between 3-4am.

. The Voice of Kenya radio station was surrounded and taken over by airmen and at 6am, the man who emerged as the coup leader, Senior Private Hezekiah Ochuka forced Leonard Mambo Mbotela, a popular broadcaster, to announce that the government had been overthrown by the military (court documents identify the announcer as having been a Miss Pamela Mburea). With him was Sergeant Pancras Okumu. The announcement of Moi's ouster was made in both English and Swahili.

. Ochuka informed listeners that he had assumed the mantle of chairman of the People's Redemption Council and declared that "Moi's bandit gang is gone!"

. Acting under instructions from Ochuka, three fighter pilots at Nanyuki Air Base (100 miles north of Nairobi) were taken at gunpoint to their aircraft and ordered to bomb State House and General Service Unit (GSU - a paramilitary wing in the Kenya Police Service) headquarters in Nairobi. The pilots played along.

. Major David Mutua deliberately performed manoeuvres designed to disorient Corporal Bramwel Njeremani who in the beginning had pointed a gun at him from the back compartment. The aircraft, 2 F-5s and a Strike Master jets, dumped their unarmed bombs while flying over Mount Kenya Forest.

. Returning to Nanyuki base, Njeremani staggered out of the cockpit and reported to his rebel colleagues that the bombing mission had been accomplished.

. James Kanyotu, the head of Special Branch, who was a wily long serving spy chief had been aware of the plans for the mutiny but had failed to get permission from Moi to arrest the suspected conspirators before the coup. Kanyotu secured a safe house for the duration of the coup from which he oversaw the jamming of air force signals.

. At 10am, the government commenced a counterattack. They attacked Nanyuki Air Base and surrounded airmen barricaded at Eastleigh base which they proceeded to shell. Both operations were coordinated by General Mohamud Haji Mohamed Barrow, the former army commander who later became the Chief of General Staff.

. Fierce fighting raged on the streets of Nairobi with corpses left on the streets. Among the victims were students who the rebels urged to demonstrate in favour of the coup.

. Widespread looting directed against Asian-owned shops took place. This was concentrated mainly in Nairobi's central business district. Around 80% of the retail trade was claimed to have been controlled by members of the Asian community who were widely viewed as symbols of prosperity and "economic oppression".

. General Mohamed assigned a small group of troops to infiltrate Nairobi, through which access had for a time been curtailed due to roadblocks, with the objective of storming broadcasting house. The airmen, who thought the approaching force were GSU men (the army had been on exercises outside of the capital city) were surprised at the fighting proficiency of the combatants. It was retaken with relative ease and the airmen who survived the assault took flight.

. General Mohamed then made his way to the studio and ordered the broadcaster Leonard Mambo Mbotela to play a record and announce a list of officers who were inside the station. Most were not, as it was a psychological manoeuvre aimed at reassuring the listening public that the government had prevailed.

. President Moi was later brought to the studio under armed guard to announce that he was in control of the situation.

. Both Ochuka and Okumu temporarily lost contact until Okumu discovered his colleague at Eastleigh Airbase trying in vain to direct air strikes from Nanyuki against approaching pro-government forces.

. Both men became apprehensive when they saw helicopter gunships approaching over the horizon but were uncertain as to which side the pilots were on.

. They were army MD500 helicopters sent by Major General John Sawe, the Commander of the Kenyan Army, to destroy the communications facility at the base. Ochuka had spent considerable time sending insulting and threatening messages to Sawe through the internal armed forces communications network. He called on Sawe to stop resisting.

. Ochuka and Okumu commandeered an air force plane and fled to neighbouring Tanzania where they applied for political asylum.

. The presence of both men in socialist Tanzania created problems with the pro-Western government of Kenya.

. In 1984, both Ochuka and Okumu were returned to Kenya in exchange for Tanzanian exiles including Gregory Ngaiza, a former aide to President Julius Nyerere who had been implicated in an army mutiny which took place in northern Tanzania in late 1983. Two other exchanged Tanzanians were the army captains, Christopher Kadego and Eugene Maganga.

. The Kenya-Tanzania exchange was criticised for violating international norms and principles concerned with the protection of refugees who have been granted political asylum.

. Although both countries were not party to the 1951 Geneva accords on political refugees because they were colonies at the time, they had nonetheless signed a similar agreement which was ratified by the Organisation of African Unity in 1969.

. Air Force Senior Private Hezekiah Rabala Ochuka and his co-conspirator Sergeant Pancras Okumu were executed by hanging on July 9th, 1987, at Kamiti Maximum Security Prison. It was the last such execution to take place in Kenya.

Posted by Adeyinka Makinde at 14:32