NATO is inviting a nuclear war 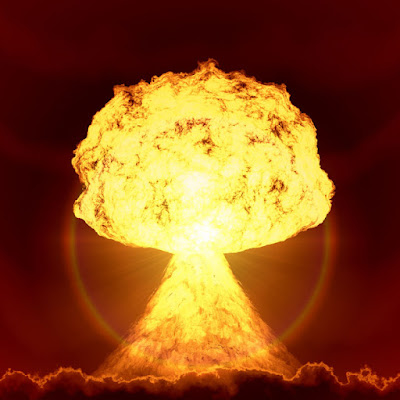 This is an excerpt of an interview which I recently conducted via skype with Katehon, a Russian-based geo-political think tank. I gave an historical overview of the evolution of U.S.-Russian relationships from the Cold War era to the present detailing how the previous emphasis on diffusing tensions through a succession of international treaties has been replaced by one of antagonism largely stemming from American policy in the post-Cold War which is largely shaped by the Wolfowitz and Brzezinski doctrines. American militarism as exemplified by its interventions in countries such as Iraq, Libya and Syria as well as by its abrogation of anti-ballistic missile treaties and its deployment of nuclear shields is imperiling world peace. The American-backed coup in Ukraine along with its sponsorship of the insurrection against the Assad government in Syria have created the circumstances which could lead to conflict with the Russian Federation and potentially to a nuclear war.
The world is already in a very tumultuous situation, which is close to a situation that historically had been avoided at the height of the Soviet Union’s conflict with America. That is, we are on the verge of a nuclear war.
After the end of the Soviet Union, there were those ideas of the “end of the history”, and how America had won, and everybody would then be like America as a capitalist entity.
The point though is that once the Cold War ended, it made NATO a redundant institution. If you have no enemy to fight, how do you justify your existence? It seems that a part of American policy has been predicated on this idea of creating enemies and sustaining enmities. This is not a criticism of the United States, but it is a criticism of American foreign policy, as it is dictated by the Wolfowitz Doctrine and the Brzezinski Doctrine.
In other words, NATO survived. And the part of this survival mechanism, in a way what President Eisenhower referred to as the Military Industrial Complex, is this idea of war and conflict. It began in Yugoslavia and has continued to the present through Iraq, Libya and now Syria.
It is a very dangerous situation, because Russia has interests in Syria, it has a naval base there. It also has an interest in combating radical Islam through ISIS and Al-Nusra, which threatens Russia and its borders, it threatens the whole world.
It is a very disturbing fact, that the US has now developed a policy, which is based on militarism. Because the Wolfowitz Doctrine is predicated on the notion that America must be a hegemon, it must dominate the world economically and militarily. And in doing so, America reserves the right to not abide by international treaties and multinational obligations. This is very specifically mentioned.
So, when you put that into the context of Syria, you find that this recent ceasefire was not observed mainly because the United States was against it. They didn't give it a chance to succeed. And in the same way, the recent massacre of 62 Syrian soldiers was not accidental. It makes particular sense from the American perspective. They are fighting a proxy war. Their goal is to overthrow the secular regime of Bashar Al-Assad and create a balkanized Syria, consisting of separate states that are based on ethnic and religious nationalities.
This whole idea of NATO and its role in the Middle East, in Syria is patently very counterproductive.
© Adeyinka Makinde (2016)