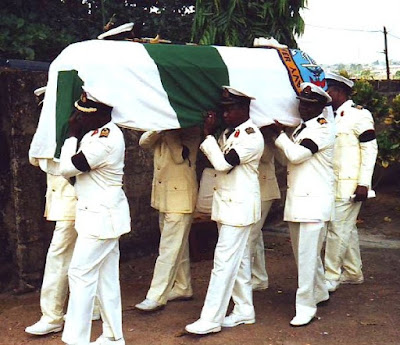 Coffin draped in the Naval Ensign, My father is carried out of the compound of his country house by officers of the Nigerian Navy

My Father was born in Lagos, then part of the Southern British Protectorate of Nigeria. He served as an administrator in the Nigerian Civil Service and the Naval branch of the Armed Forces. He also served on a five-man panel on the issue of Abandoned Properties stemming from Nigeria's Civil War set up in September 1975 by the regime of Brigadier Murtala Muhammed. After retirement, he turned to the farming business in his hometown where he involved himself in many community development programmes. He died in October 2000.

The following text is from the funeral brochure entitled “Celebration of a Fulfilled Life”:

Navy Captain Emmanuel Oladipo Adeshiyan Makinde (rtd) was born on the 6th day of May 1932 in Lagos. He started his Primary Education at Ade-Oshodi Memorial Baptist Day School, Lagos and concluded it at Baptist Day School Oke-Ishokun, Oyo. He later attended Eko Boys High School for his Secondary Education.

Captain Makinde as he was generally called, was highly interested in Commercial/Secretarial activities. He got himself trained as a Verbatin Reporter focusing on the achievements of people like Mr. Horatio Agedah as a role model. His first appointment was with the Lagos City Council in 1949, where he was Stenographer in the Personnel Department and on many occasions took responsibility for very confidential letters of the Major of Lagos.

In 1957, he travelled to England on study-leave. It is remarkable to note that it took him less than 48 hours in London to get a stenographers job in the office of the director of the Ministry of Works. Captain Makinde, while in the Ministry of Works in the UK, demonstrated his capacity for athletics and eventually became the Captain of the Ministry’s Athletics Club. At the end of his studies, Captain E.O.A. Makinde qualified, by examination, as a member of the Institute of Chartered Secretaries and Administrators.

He returned to the Lagos City Council in 1961. In Lagos, he quickly moved horizontally on transfer to the Audit Department of the Federal Ministry of Works, where he remained until 1964 when he joined the Nigerian Navy as a Sub-Lieutenant.

In the Nigerian Navy, he subsequently rose to the following positions before he voluntarily retired in 1981:

●      Flag Lieutenant to the Chief of Naval Staff.

●      Naval Attache to the Nigerian High Commission in the UK.

●      Director of Supplies and Logistics.

After he retired voluntarily as a Naval Captain at the age of 50, he moved to Oyo Town to set up a Poultry Farm. He was also involved in Community Development Programmes. He was however offered appointment as a Special Adviser to the then Civilian Governor of the old Oyo State, Dr. Omololu Olunloyo, a position he declined for personal reasons.

Between 1984 and 1987, he served as the Chairman of Associated Breweries Limited and Odu’a Textile Industries Ltd. He was also a Founding Member and Director of Akesan Community Bank, Oyo.

Late Navy Captain Makinde in his lifetime was a very active member of the Oyo Caucus and held the position of Financial Secretary until his death.

He was recently appointed the Chairman of the Pensioners Union Oyo.

Late Navy Captain Oladipo Makinde (rtd) was a devout Christian and an excellent family man. He offered his residence for many years as a place for Christian Fellowship Meetings. He would be long remembered for his friendliness, sound advice on knotty issues and numerous philantrophic gestures. Oladipo will live on in our hearts and minds.

Posted by Adeyinka Makinde at 22:56