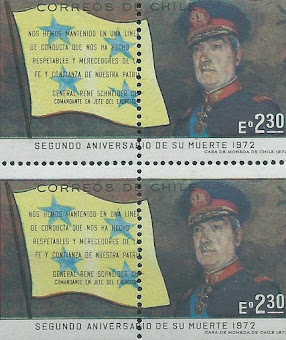 The assassination of Chilean General Rene Schneider who died on October 25th 1970 from wounds sustained in an attack three days earlier is worth recalling because of his stand in protecting the constitutional process in his country, as well the circumstances of his murder.

He was a pro-democratic military official who affirmed that the role of the armed forces should be apolitical. During a General Staff meeting on July 23rd 1970, Schneider said the following:

The armed forces are not a road to political power nor an alternative to that power. They exist to guarantee the regular work of the political system and the use of force for any other purpose than its defence constitute high treason.

Schneider had issued this powerful statement at a time when there was agitation within the Chilean army to block the confirmation of Salvador Allende, a Marxist-influenced politician, as the President-elect of Chile. It came to be known as the "Schneider Doctrine".

His murder, at the hands of a right-wing faction of the army led by General Roberto Viaux, a retired officer who had previously engineered a mutiny over soldiers pay and conditions, was a state-sponsored enterprise involving the United States Central Intelligence Agency with the knowledge of Henry Kissinger, the National Security Advisor during the Nixon presidency.

The “Schneider Doctrine” would be challenged and finally destroyed on September 11th 1973, when a violent military coup deposed President Allende and brought to power a military dictatorship led by General Augusto Pinochet. And on March 30th 2004, Schneider’s murder was the subject of a legal complaint brought by his estate against Kissinger in the United States. The action was dismissed and finally ended in 2006.

The threat of the rise of governments which could be perceived as anti-American in Latin America, had of course obsessed the United States for decades before the enunciation of the Schneider Doctrine. The Monroe Doctrine, through which the United States demarcated its Western Sphere of influence, applied not only to the old European powers but to the emerging power of the USSR. The reported plan by the Socialist Junta to confiscate wealth while operating a soviet form of government caused a great deal of apprehension in Washington when the Government Junta of Chile was established in June 1932. American interventions in Latin America were persistent and in the Cold War era, Allende, who pursued a policy of nationalisation, and who was a self-described “implacable enemy of Yankee imperialism” drew the ire of the United States which subsequently aided his overthrow.

Although the era of the military junta appears to be in the distant past, the relevance of the Schneider Doctrine remains. The military coup which overthrew Honduran president Manuel Zelaya in 2009, has been followed more recently by the pivotal role played by the Bolivian military in securing the resignation and resulting exile of President Evo Morales, as well as President Jair Bolsonaro raising the prospect of military intervention in Brazil to protect his hold on power.

Posted by Adeyinka Makinde at 20:40