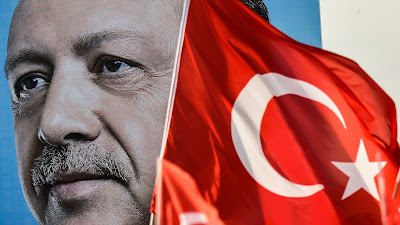 Turkish President Recep Erdogan’s recent comments regarding his French counterpart Emmanuel Macron’s mental state has led to the recall of the French ambassador from Ankara. His assertion that Macron was “in need of mental health treatment” was not his first barb aimed at the French president. Back in August, he accused Macron of having “colonial aims” in Lebanon and referred to Macron’s visit to Beirut as a “spectacle”. But if there is any truth to Erdogan’s accusation, it is almost certainly a case of psychological projection. Erdogan himself has been explicitly engaged in a perennial quest aimed at restoring Turkish grandeur and influence to the great cost and the irritation of his country’s neighbours and traditional allies.

That Recep Erdogan would be sensitive to comments construed as anti-Muslim in sentiment, is not particularly surprising. He is by all accounts a devout Muslim. Further, many consider his ideological roots when he began a path into politics as akin to that professed by members of the Muslim Brotherhood. He is today perceived by many to be an al-Ikhwan al-Muslimun in a suit.

But his publicly uttered umbrage at President Macron’s speech cannot merely be interpreted as a spontaneous reaction of a pious statesman. His failure to express regret over the beheading of a French History teacher by an Islamist student who was offended by the display of two cartoons depicting the Prophet Muhammad alongside other cartoons during a discussion on freedom of speech speaks volumes. Those who know the man well will be bound to see it as a calculated move geared toward building up his image at home, as well as promoting himself as a righteous leader of the Muslim world.

Erdogan is a man who is adept at self-promotion. He is also consistently involved in one or other conspiratorial endeavour aimed at expanding Turkey’s geopolitical sphere of influence. It is neither inaccurate nor lazy to attribute his agenda as being that of attempting to facilitate the emergence of a neo-Ottoman state.

Yet, all his designs have so far ended in failure.

His attempt at weaving this Ottoman dream in Central Asia went awry in the 2000s because his Turkic cousins wanted more money than Erdogan could afford. Erdogan was knee-deep in the attempt to balkanise Syria in concert with the Saudis, Israelis, and US-led NATO states. But this was frustrated by the actions of Russia, Iran, and the Lebanese militia Hezbollah. More recently, Erdogan tried to bolster his prestige at home by asserting a Turkish sphere of influence across the Mediterranean by threatening the Greeks and intervening in the Libyan mess created by NATO's overthrow of Gaddafi. He was frustrated in this endeavour not only by Egyptian and Greek actions which called his bluff, but also by Macron's stated intent to militarily oppose any overt acts of Turkish aggression in the region.

Ever the troublemaker, Erdogan has been revealed as an active backer of the Azeri attack on Armenian-controlled Nagorno Karabakh, an action that has brought back memories among the Armenian populace and the Armenian Diaspora of the Ottoman orchestrated anti-Armenian genocide of the early 20th century.

Back in July, Erdogan's decision to sign a decree which will turn Hagia Sophia into a mosque will signal the final nail on Christendom in what used to be the Christian city of Constantinople. An ineradicable opportunist, he likely chose this moment in time to capitalise on the recent schism in the Eastern Orthodox Church, which is based on the geopolitical animus between Russia and Ukraine.

Through all of this he has lost friends: Erdogan has fallen out with President Bashar Assad of Syria, President Vladimir Putin of Russia, as well as the Saudis. The European Union, which Erdogan once aspired to join, has become wary of him -if not hostile- because of his intermittent attempts to extort money through the threats of coercive engineered migration. And his relationship with the United States has been poor since the 2016 coup which he believes was a NATO-backed operation using the followers of the exiled Fethullah Gulen.

Through all his adventures, he has burnt bridges as well as his fingers. The “Zero Problems with Neighbours” policy which he trumpeted at the beginning of his tenure in office has long been in tatters. But the parlous state of the Turkish economy which had been steadily contracting prior to the global recession caused by the covid-pandemic may mean that his endless scheming and posturing will not abate.

The question that now remains is when will the world be finally rid of this meddlesome and mischievous neo-Ottoman sultan?

Adeyinka Makinde is a writer based in London, England. He has a keen interest in issues pertaining to global security.

Posted by Adeyinka Makinde at 01:35