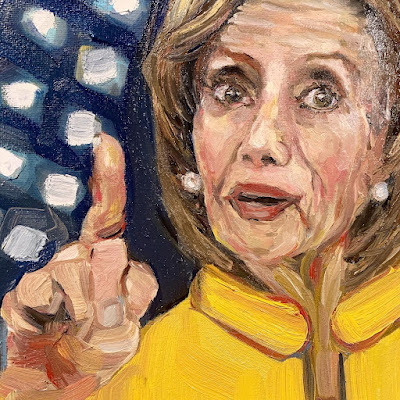 In a speech titled “State of American Democracy” at an event held at Chatham House, London on September 17, 2021, U.S. House Speaker Nancy Pelosi said that capitalism “has not served (the U.S.) economy as well as it should”. Yet Pelosi, who argued that “you cannot have a system where the success of some springs from the exploitation of the workers”, has over the years demonstrated her support for corporate interests over those of workers. She has also been a keen backer of the Military Industry and the National Security State in the wasteful wars of regime change which have hugely profited a few while costing her country trillions of dollars that could have been purposefully spent on alleviating poverty, tackling homelessness and giving young people a debt-free college education.

Pelosi’s statement will inevitably invite an examination of her record in confronting the excesses of capitalism in all its manifestations during her political career.

Where was she when the out-of-control investment banks were bailed out after bringing the US economy to the brink of ruin in the late 2000s? Pelosi voted to bail them out because they were "too big to fail". But more damming, Pelosi did nothing to save those who had their homes and properties foreclosed after being set up to fail by the financial institutions.

Indeed, she has accepted election contributions from the criminally-orientated Goldman Sachs which made a fortune by betting against its own clients prior to the aforementioned financial meltdown.

More recently, Pelosi was not active in attempting to extend the moratorium of evictions caused by the prevailing circumstances of the covid-era. Nor has she vigorously sought to extinguish student loan debt.

She is a great supporter of the US National Security State and its financial and morally costly policy of regime change. She stood up and applauded the C.I.A. stooge Juan Guaido when President Donald Trump pointed him out at the State of the Union Address during which Pelosi theatrically tore up her copy of Trump’s speech.

Pelosi's support for Guaido, whom the US was using as the figurehead of an opposition movement designed to overthrow the legitimate government of Venezuela, is not surprising given that she has received campaign money from powerful elements within the Military Industry such as Boeing and Lockheed Martin.

This sheds light on the hypocrisy of so-called "liberal" support for interventionist wars on the grounds of "humanitarian bombing". It explains why Pelosi the "liberal" not only supported the decade-long endeavour by the United States and its regional allies to overthrow the government of Syria, she opposed Trump's policy of getting out of Syria (the eastern part of which the U.S. illegally occupies), and continues to support the harsh regime of sanctions against the Ba'athist-led nation which after frustrating the concerted effort to destroy it, is in desperate need of all the resources it can muster from reconstruction. In 2019, Pelosi had even tweeted that Trump's anti-Syrian sanctions package was not strong enough.

Today, the wealthiest corporations get away with paying minimal or no tax at all while making tens of billions in profits. That lost revenue together with the trillions lost through futile efforts made at effecting regime change and nation building such as in Afghanistan (described as a “wealth transfer from U.S. taxpayers to military contractors”) could be better spent at alleviating poverty, tackling homelessness, and providing young people with a debt-free college education.

Pelosi is a wealthy woman. If she was genuinely left-wing, she could be described as a "Champagne Socialist". As things stand she perfectly captures the appellation of what is pejoratively termed a "Shitlib".

Posted by Adeyinka Makinde at 19:39