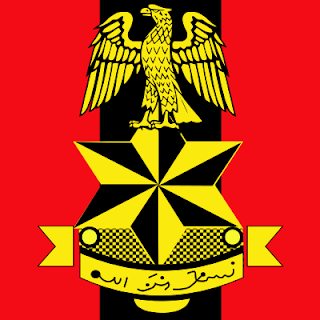 Crest of the Nigerian Army

This second mutiny of 1966 was not ideologically motivated. It was about vengeance and naked tribalism. Codenamed 'Operation Araba' (*) -"Let Us Part" in the Hausa language- the intention of the mutineers led by Lieutenant Colonel Murtala Muhammad was to exact retribution on fellow soldiers from the then Eastern Region of the country, who were mainly of Igbo ethnicity, prior to withdrawing to the Northern Region from where most of the rebels originated.

They believed that the mutiny of January 1966, which had been led by Major Patrick Nzeogwu, bore heavy overtones of tribalism. The overwhelming majority of the politicians and soldiers who had been assassinated hailed from the Northern and Western Regions. Nzeogwu and most of his primary cohorts were Igbo. Moreover, they argued, the officer who acceded to the mantle of Nigerian ruler at the expense of the civilians in power, the aforementioned Ironsi, was himself an Igbo.

The idea of an 'Igbo plot' to establish a form of hegemony over the rest of the nation was further encouraged by what many Northern army officers believed to have been promotions favourable to Ironsi's kinsmen even though soldiers such as Murtala Muhammad had benefited. The leaders of the failed first mutiny had been put in jail but there appeared to be little signs that they would be punished. The event which crystallized this line of thinking had been Ironsi's decision in May of 1966 to promulgate a Unification Decree which altered Nigeria's federal framework to that of a unitary state.

The protests which followed in the Northern Region escalated into rioting and a pogrom against Igbos. It was a baleful prelude the events of July 29.

As events unfolded, Muhammad, whose men had hijacked a civilian airliner to repatriate the families of the mutineers back to the Northern Region was persuaded not to pursue the course of secession. After three days of tense negotiations with foreign powers including Britain and the United States and within the faction of the Army in control of Nigeria's capital city, Lagos, Lieutenant Colonel Yakubu Gowon, a Christian from a minority group from Nigeria's Middle Belt, assumed the leadership of the army and the rest of the country apart, that is, from the Eastern Region. Lieutenant Colonel Odumegwu Ojukwu, the governor of that region refused to accept Gowon's authority and the course was set for a confrontation which would lead to the birth of the rebel Republic of Biafra and a civil war which would endure until the beginning of 1970.

July 29 1966 was a day of tragedy on so many levels. It represented the unleashing of a naked blood lust which consumed the lives of many soldiers. It extended the stage for the playing out of inter-tribal rivalries from the political arena into the ostensibly neutral institution of the army. The involvement of Western powers in the negotiations aimed at keeping the country together exposed the fragile sense of nationhood as well as the country's vulnerability to foreign manipulation.

It is a day on which Nigerians can reflect not only on the severe consequences that disunity can reap, but also as a reminder of the rock bottom alternative to choosing a peaceful means of transitioning into separate sovereign nations if that is the collective will of the people.


Adeyinka Makinde is a writer based in London, England

(*) The coup was actually codenamed "Operation Aure" (Hausa for "Marriage"), but over the course of time has come to be referred to as "Araba", given that the aim of the coupists was to secede from Nigeria. Chants of "Araba" accompanied the demonstrations and rioting in the North after Ironsi's Unification Decree.
Posted by Adeyinka Makinde at 11:44