Boxing and the Limits of Courage 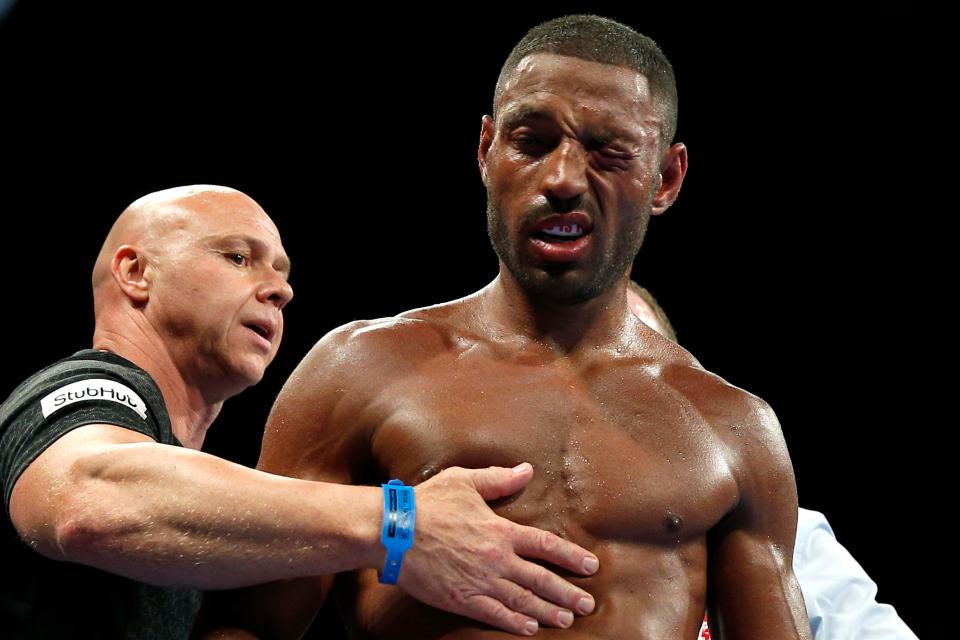 Kell Brook after his bout with Errol Spence

Boxers are a crazy and gallant species of humanity.

They will fight on while suffering from all manner of physically debilitating conditions: lacerations, broken jaws, severe haematomas, split tongues, dislocated shoulders and even shattered orbital bones.

Pride and determination allied to extraordinary levels of fitness have often brought out an amazing capacity for bravery, and many would argue foolhardiness, in pugilists fighting both for honour and for prize money.

If the human capacity for enduring frightening levels of physical punishment is examined, many of the best exemplars must surely be found in boxing history.

Joe Frazier, the late former heavyweight champion of the world fought for many years while being practically blinded in one eye and partially sighted in the other. Fearful that his career would be ended in the manner of fellow Philadelphian boxer ‘Gypsy’ Joe Harris, Frazier memorised the opticians chart to ensure that discovery of his handicap was avoided during routine pre-fight medical examinations.

He had profited from this sort of deception in his past. He kept quiet about breaking his thumb during the semi-finals of the Olympic Games in Tokyo as discovery would have put paid to his hopes of winning the gold medal he eventually acquired.

His rival Muhammad Ali fought for over ten rounds with a broken jaw after a right cross thrown by Ken Norton pierced through his guard in the second round. Ali felt  a “snap and a sudden gush of blood” run down his throat.

And while Norton later disputed this claim by asserting his belief that he had broken Ali’s jaw in the later rounds, few can argue that both Ali and Frazier were prepared to duel to the death in a dangerously overheated arena in the Philippines in 1975.

“It was like death,” Ali remarked after the ‘Thrilla in Manila’. “Closest thing to dyin’ I know of.”

Somewhere in-between the respective feats of enduring the excruciating pain of moving around with a broken jaw (not to mention the sharp bursts of pain that coursed through him with subsequent blows to the head and body) and the feeling of exhaustion to the point of physical expiration, boxing lore records Carmen Basilio battling the great Sugar Ray Robinson with a haematoma around an eye which practically rendered him blind for eight rounds of a grueling 15-round world middleweight championship contest.

Not forgotten also is a night in July of 1967 at New York City’s Madison Square Garden when the Canadian heavyweight George Chuvalo absorbed a brutally executed left hook from Joe Frazier which shattered the orbital bone under his left eye. Chuvalo underwent reconstructive surgery in order to re-position his eye which had dipped towards the orbital floor.

But while Chuvalo, who successfully resisted the best efforts of the American Medical Association to have him barred for life, went on to fight thirty more times and Basilio retired with his eye and his faculties intact until his death at the ripe age of 85, the number of boxers who have had to live their years in the darkness of both blindness and dementia pugilista serve as a sobering antidote to boxing’s tendency to revel in its tales of ring daring and fortitude.

In September of 2016, Kell Brook, a British welterweight boxer, suffered a broken orbital bone in a fight with the world middleweight champion Gennady Golovkin. The corrective procedure involved the temporary measure of taking his right eye out of its socket and reinforcing the bone with a titanium implant. Brook had been advised that he had been potentially one blow away from permanently losing his eyesight.

Yesterday, while defending his IBF world welterweight title against the American challenger Errol Spence, Brook sustained an injury on the left side of his eye during the middle rounds. The area around the eye began to swell and the symptoms of discomfort progressively mirrored those he had experienced during his bout with Golovkin.

Needless to say, fighting with diminishing vision, and, in Brook’s case, double vision, presents a tremendous handicap to a boxer. A fighter needs to fix his eyes on a high point of his opponent’s chest. This enables his peripheral vision to anticipate the beginning of his opponent’s punch from either left or right side.

Fighting out of an orthodox stance and a boxer’s crouch, Brook’s left eye would have provided him with both elevated and lateral vision of Spence’s movements. But having impaired vision would have forced him to adjust the way he positioned his body, making him more vulnerable to Spence’s attacks.

Defence in boxing at a fundamental level involves establishing a ‘safe’ distance between the fighter and his opponent. A diminished eye not only severely undermines this, it also causes him to be off balanced.

As the fight wore on, Brook, who had fought a competitive bout of attrition with Spence, began to fade. He suffered a knockdown in the tenth round and in the eleventh, he voluntarily dropped to one knee. The referee decided to end it after administering a count.

While boxing does not lead the statistical field in terms of sports-related fatalities and non-fatal injuries, its detractors understandably frequently express their opposition to the sport on the grounds that boxing lacks sound moral underpinnings because its participants set out to deliberately inflict damage on each other.

The Marquis of Queensberry Rules as well as the standards followed by boxing commissions and the world sanctioning bodies strive to ensure that the safety and well-being of fighters is always of paramount concern. Translating this objective into practice relies on the good judgement not only of officials and the fighter’s handlers, but also of the boxer himself.

Although the violent nature of boxing is sanitized by its rules and regulations, it essentially remains a brutal sport. Still, the safety measures adopted are intended to separate it from the blood sport barbarity of Roman-era gladiatorial combat.

While the sport revels in the valour of its combatants, it is generally acknowledged that there have to be limits placed on the almost infinite reserves of courage from which fighters are disposed to drawing.

It is while bearing all of this in mind that those followers of boxing who casually refer to Kell Brook as a “quitter” and even a “coward” should take stock and pause for some serious reflection.

Adeyinka Makinde is the author of DICK TIGER: The Life and Times of a Boxing Immortal and JERSEY BOY: The Life and Mob Slaying of Frankie DePaula. He is also a contributor to the forthcoming Companion to Boxing to be published by Cambridge University Press.
Posted by Adeyinka Makinde at 18:51