Schadenfreude - Why Putin is Laughing 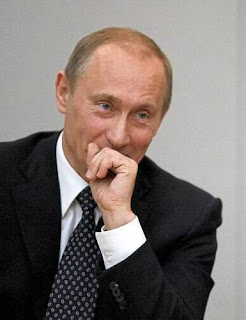 
Vladimir Putin is probably laughing his head off.


The current Russian-centred imbroglio in the United States involving its Congress, its President and the hidden state, replete with ill-tempered verbal jousting and backdoor scheming has gathered a level of momentum many would suggest amounts to a state of impeachment fever.


Why might the president of the Russian Federation feel disposed to privately allow himself a chuckle at the present state of affairs in the United States? The answer lies in the not uncommon human capacity for schadenfreude.


The United States has consistently created mischief in countries bordering the Russian Federation and within Russia itself in order to put pressure on a state which unlike the one headed by Boris Yeltsin has not been inclined to bow to the foreign policy dictates of the United States which finds it intolerable for other nations to pursue an independent course in foreign relations.


The United States has sought to intimidate Russia by expanding the Nato military alliance close to its borders as well as by fomenting a so-called ‘Color Revolution’ in Ukraine between 2004 and 2005, a war with Georgia in 2008 and a coup d’etat in Ukraine in 2014. These were covert operations involving the use of proxies which included NGO fronts and neo-Nazi militias.


While Russia has been reactive rather than proactive in the various crisis around its borders, it is nonetheless clear that it has a national policy objective geared towards weakening American influence in Europe. It has provided varying degrees of support and encouragement for nationalist political parties in countries such as France and Hungary. This is widely believed to include financial support.


Parties such as the Front National and Jobbik are strongly anti-European Union. Russian animus towards the EU is hardly surprising given its view that the EU has been used as a tool by Washington as cover for United States aggression including the anti-Russian sanctions imposed by the EU over the Crimean Crisis; a crisis caused by the American-backed overthrow of the Yanukovych government which threatened Russia’s vital national security interests in regard to its Baltic Fleet based in Crimea.


Only a few could fail to understand if the Russian response to this catalogue of aggression was to back an American presidential candidate who was promising to improve relations between both countries. The question which has consistently exercised many in the United States is whether such support went to the extent of the provision of finance, cyber-hacking and even blackmail.


It is an issue often presented by the American media with an affectation of moral integrity that camouflages the unsavoury history of United States interventions in foreign nations using such means as electoral fraud, economic blackmail, political assassinations and the violent overthrow of governments.


The post-Soviet Russian state has been on the receiving end of electoral manipulation directed by the United States. An American-directed IMF “emergency infusion” of over ten billion dollars into the Russian economy re-routed a substantial amount of this sum into the coffers of the Western-backed lackey Boris Yeltsin who had been languishing with a single-digit approval rating in the run-up to the Russian presidential elections of 1996.


Yeltsin would win a disputed election during which the pro-Yeltsin team engineered a dirty tricks campaign that included  the use of disinformation and disruption tactics against the opposition.

The American media which is quick to chase the scent of any form of difficulties faced by the Kremlin and of dissent within Russian civil society is now contending with a daily news deluge of chaos in the White House intensified after the recent dismissal of FBI head James Comey by President Donald Trump.


Comey’s sacking, the resignation of Michael Flynn as national security advisor,open bickering between the president and the intelligence community as well as calls in congress for the appointment of a special prosecutor have at their root the question of supposed Russian meddling in the last American presidential campaign.


Observing the United States in turmoil over the Trump presidency, Putin could not prevent himself from making the following barbed comment over the recent allegation that Trump had revealed classified intelligence to visiting Russian foreign minister Sergey Lavrov:


We see that the United States has been developing political schizophrenia, this is the only thing I can think of when I hear allegations saying that the president has revealed some secrets to Lavrov


The still unproven allegations of Russian hacking during the American presidential elections as well as that related to Trump being compromised by a blackmail operation conducted by Russian intelligence only serve to confirm that the United States has plunged itself into a self-inflicted state of tumult.


The baleful westward gaze of the Russian sphinx described by Aleksandr Blok in his poem The Scythians might for a short time at least be replaced by a softer, wrinkly countenance suggestive of a smile.


It is a smile that reeks of schadenfreude.