The Life and Death of Lieutenant Colonel Michael Iyorshe 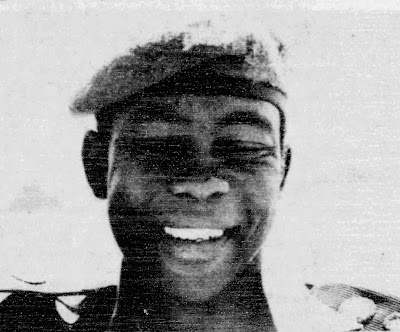 Iyorshe was a brilliant Nigerian Army officer who was implicated in an alleged conspiracy to overthrow the military regime led by (then) Major General Ibrahim Babangida. He was arrested in December 1985, sentenced to death in February 1986 and executed on March 5th 1986.

. Lt. Colonel Iyorshe was an infantry officer born of the Tiv ethnic group.

. He won the Sword of Honour at the Nigerian Defence Academy (NDA) for achieving the best overall performance during his initial officer training.

. He came first in the officer promotion exams respectively for Lieutenant to Captain and Captain to Major.

. He was the best foreign officer at junior staff college in Canada.

. He attended senior officer staff training at Camberley in England where he excelled at fieldcraft

. As a Major he commanded a battalion at Birnin Kebbi in North Western Nigeria and then served as Brigade Major in the Brigade of Guards in Lagos.

. He was promoted from Major to Substantive Lieutenant Colonel with effect from September 20th, 1984.

. In 1984, he was appointed as a member of Directing Staff (DS) at the Command and Staff College in Jaji soon after the coup which brought Major General Buhari to power.

. Controversy still surrounds the alleged conspiracy which some refer to as a phantom coup. Others believe that general discussions which were critical of the Babangida regime were misconstrued as evidence of an intent to proceed with a plan to overthrow the military government.

. Iyorshe was perceived to be a non-political officer as was evidenced by his negative attitude to the 1983 coup which overthrew the civilian government of President Shehu Shagari. However, he is said to have had misgivings about the government of Babangida, a man who he described as a "master of intrigue".

. The following quote is attributed to Iyorshe:

"What I personally feel is that the nation itself needed a better deal. There have always been people whose only ambition is to lead, not serving any national interest. There has always been individual, tribal or business rights, never the rights of this nation to a better image; social, economic, political and military programs and plans. Nigeria deserves a group of people or leaders transparently honest enough to publish all their assets and liabilities on the pages of newspapers for the world to see. Not a nation where anybody will be allowed to have a foreign bank account let alone the millions stored away. The nation should be such that any Nigerian regardless of his tribe or religion will have the right to aspire to the leadership or rulership of the country. Nigeria was fast sinking to a state of despondency and anarchy. They never and still never trust their leaders. The anarchy at our airports characterises the state of the nation. Corruption is rife in this country and transcends all spheres of life. It is something the nation has to solve. Professional incompetence and mediocrity are rewarded whereas hard work is mocked.

Within the military, the situation was and still is very tense. The welfare of soldiers is totally neglected such that soldiers still live in batchers over ten years after the civil war; no uniforms, no drugs in the hospitals; soldiers are being subjected to too much guard duties, little or no chance to themselves and their families. The discipline in the army in particular was deteriorating rapidly as exemplified by the report of what happened in Lagos on August 27th, 1985 (Iyorshe was referring to the looting of Buhari's personal possessions from his home by coupists).

The question of leadership was not discussed quite seriously, but it was with one exception, felt that the army had always dominated leadership. This was not an issue anyway as there were no solid plans regarding such things, the method of operation and the question of finance. I never considered myself for any higher military or political appointments. In fact, at first, all of us believed that if we succeeded, some senior officers of honesty would be called to rule.

Personally up till quite recently, I never believed that coups solve any problem or else Bolivia would be paradise on earth. But then things seemed to get worse and worse."

. Iyorshe is said to have been calm at the execution stake and is claimed to have even directed some lighthearted words towards Major General Mamman Vatsa who was tied to the stake next to his. Both men laughed.

. Iyorshe was executed on the birthday of his only son.

. Both Iyorshe and his fellow instructor Lieutenant Colonel Moses Effiong were filmed performing their duties at the Command and Staff College in 1985. The footage appeared in Episode 6 of PBS-produced series The Africans: A Triple Heritage. The episode was titled “In Search of Stability”.

. Effiong, whose sentence was commuted to a term of life imprisonment, denied being a part of the plot and claimed that he was implicated by Iyorshe, with whom he had fallen out in 1983. Effiong’s wife died in a road accident while on her way to visit him in prison. He was released in 1993.

.  Effiong was pardoned in 2020 by President Muhammadu Buhari whose military regime had been overthrown by Major General Babangida in August 1985.

Posted by Adeyinka Makinde at 22:13