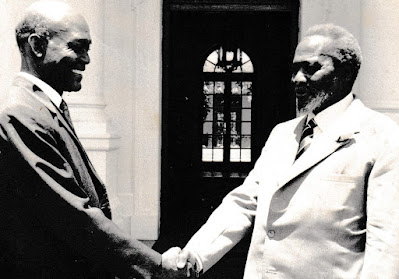 Commodore Wey was in Nairobi to deliver a special diplomatic message to President Kenyatta on behalf of Lt. Colonel Yakubu Gowon, the Head of the Federal Military Government of Nigeria.

Wey, a member of the Supreme Military Council, was accompanied by Edwin Ogbu, the Permanent Secretary to the Federal Ministry of External Affairs.

Also accompanying Wey was my Father, Lieutenant Emmanuel Oladipo Makinde, his aide-de-camp, who was officially designated the Flag Lieutenant to the Chief of Naval Staff.

Although the content of the letter was not revealed, the Federal Military Government was at the time involved with garnering support for the Federal side during the political crisis that would lead to the outbreak of a civil war between the central government and the Eastern region which became the secessionist state of Biafra.

Commodore Wey functioned for a short period of time as an Acting Foreign Minister and the Personal Representative of the Nigerian Head of State. My Father accompanied Wey, who was promoted to the rank of rear admiral in 1967 on visits to locations such as Kenya, Canada and the Vatican.

Prior to this, my Father had accompanied Wey to the Aburi Peace Conference in Ghana and the burial of the slain military Head of State, Major General J.T.U. Aguiyi-Ironsi in Umuahia-Ibeku in January 1967.

My Father went on to become the Deputy Defence Advisor to the Nigerian High Commission in London, performing this role of a military attache in the early 1970s. Later, he became the Director of Navy Supplies and Logistics.

He retired, voluntarily, at the rank of captain.

Posted by Adeyinka Makinde at 07:03