Book Review: Becoming Something - The Story of Canada Lee 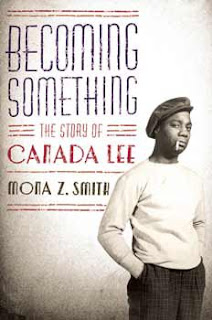 It is supremely ironic that Lee Canegata, better known first to boxing audiences and later to movie and theatre connoisseurs as Canada Lee, strived all his life to become somebody only to become at the end of an extraordinary life little short of a nobody.This is the theme of Mona Z. Smith's biography 'Becoming Something,' the first comprehensive study of the life and the times of a neglected figure destroyed by the McCarthyite purges of the 1950s.

Lee was something of a renaissance man, displaying talents first as a juvenile concert musician, and then as a horse racing jockey. Changing sport, he became a top contender for the national welterweight title, a quest which was put beyond him by way of a blinded eye.

Finally, Lee reinvented himself as an actor, firstly as a thespian with the Federal Theatre Project's Negro Unit and then as a screen actor in Alfred Hitchcock's Lifeboat and later in the seminal boxing movie directed by Abraham Polonsky, Body and Soul. But while his eventual vocation was obstensibly acting, it is his role as a left-wing activist suffused as it was with his uncompromising quest for racial justice, which Lee assumed as his life's calling.

Born in 1907, the son of an immigrant from the Virgin Islands, Lee grew up always on the verge of poverty but inured with a sense of wanting to achieve. His father, though a respectable lower middle class clerk, had disinherited himself from his father's ship building business when he stowed away as a cabin boy to America and failed to return. Canada was aware of the history of high achievement in his family and one of his uncles would become a distinguished physician and legislator.

The music lessons Lee opted to take would involve him mastering the piano and violin and would lead him to a concert debut at New York's Aeolian Hall. Later in life, he would become a fairly adept jazz bandleader though not of the calibre of his idols Fletcher Henderson and Duke Ellington.

Lee took up boxing during the 1920s, a period dominated by Jack Dempsey but also tapestried by the ongoing race ban on blacks fighting for the heavyweight title. Part of his inspiration doubtlessly was the rise of Harry Wills as a contender for Dempsey's title -a quest which would ultimately meet with failure given the lack of willingness on the part of the relevant politicians, promoters and Dempsey himself to make the fight.

It is to a boxing announcer that the name Canada Lee is credited. Severely challenged by the Danish originated surname, Joe Humphries settled for 'Canada Lee' while introducing him as a young amateur. That he had talent is beyond dispute. Lee won A.A.U. titles at all levels; graduating from Metropolitan to State, Inter-State,Junior National and finally to National Championships.

As a professional in the welterweights, he won many contests but lost to ex-champion Jack Britton by a decision. Twice he drew with Vince Dundee, brother of Joe Dundee, the world champion. But while Lee was undoubtedly an entertaining box office draw who earned $90,000 in his career, some, like Damon Runyon, later reflected that he was not the "Sugar Ray Robinson" of his day as once opined by a writer for Ring magazine.

Lee himself felt that he had been denied some decisions, and a route to the championship when at his peak on account of his race. In 1929, a blow above his right ear delivered during a fight he won against Andy Divodi succeeded in detaching his retina and although he fought on and won a number of subsequent bouts, his career headed for a downward spiral. This included two losses against Lou Brouillard, who won the world title seven months after their second fight. Lee retired in 1934.

As an actor, Lee's achievements spanned theater work with Orson Welles, the lead on the Broadway production of Richard Wright's 'Native Son' , Shakespearean roles in 'The Tempest' and 'Othello'. He also became the first black producer to present a drama on Broadway in 'On Whitman Avenue.' Opportunities in film were much less but he managed to essentially re-write his lines and bring dignity to the only black character in Hitchcock's Lifeboat.

He would also bring his boxing experiences to bear in his role as Ben Chaplin in Body and Soul. Chaplin is the brain injured ex-champion who is persuaded by a crooked promoter named Roberts to take on the rising star, Charlie Davis who is played by John Garfield. Desperate for money, Chaplin, who has a life threatening clot on his brain, accepts the fight on Roberts' assurance that Charlie will take it easy on him -a condition which was not relayed to Charlie.

Chaplin and Davis forge a friendship and a business partnership afterwards with Chaplin training him onto title glory. But Chaplin struggles to keep Davis's moral values intact and it is only after Chaplin dies in a struggle after confronting Roberts about a scheme which would have had Davis take a dive that Davis breaks out of his malaise to stand up to the corrupt promoter.

The movie would play its part in his eventual downfall. Screenwriter Robert Rossen, director Abraham Polonsky and actor Lloyd Gough were members of the Communist Party. Garfield, to many the prototype of the likes of Montgomery Clift and Marlon Brando, was what could be described as a 'liberal activist;' somewhat of the same mould as Lee.

The movie was 'progressive' in the sense that it hired a great many black actors as extras and bit players. Importantly, its unflattering portrayal of the boxing industry and its exploitative tendencies could easily be viewed as an indictment on the evils of capitalism. All persons involved in the movie would eventually fall foul of the impending McCarthyite purges and Garfield, like Lee, would meet an early death attributable to the coming storm.

To say that Canada Lee was a naive dabbler in politics who may have been duped or led astray by seasoned political activists would be way off the mark. He was much too independent minded to be anything other than his own man. He defiantly supported election candidates with Marxist leanings and refused to budge or tone down his invective about racial injustice.

Rather, as was the case with Paul Robeson, he remained uncompromising about his convictions much to the cost of his career. Offers dried up and friends and acquaintances, fearful of the guilty-by-association mores of the times, shunned him.

What attracted Lee to far left politics? Like many African-Americans he would not have failed to notice that the left went further than white Liberals in the insistence on radical change in the legal, social and economic subjugation of blacks. Communist or communist associated groups for instance, had vociferously supported various anti-lynching campaigns and legal funds for black defendants such as the Scottsboro Boys.

Further than issues of race, Lee was fully aware that his opportunity of escaping from a possible life of poverty as a disabled, ex-pug was facilitated by the socialist-style policies engineered by Franklin D. Roosevelt's 'New Deal.'

He had been affixed with the 'communist' tag as early as 1943 by both the Federal Bureau of Investigation and the House Un-American Activities Committee. However, with the United States and Soviet Union allied in the cause of defeating Nazi Germany, this did not bear the ominous implications of the post-war period and the consequent descent into external 'Cold War' and the internal 'Witch hunts'.

His name came up in the notorious 1949 spy trial involving Judith Coplon which was the first to implicate an American spying for the Soviet Union. Lee's name was listed among other stars including Edward G. Robinson and Paul Robeson as being members of the Communist Party or Communist-front organisations. The coup de grace was delivered by Lee's denunciation by his longtime friend, Ed Sullivan in his nationally syndicated column.

Interestingly, Lee's marginalising did not follow the conventional route. His name did not appear in the notorious pamphlet Red Channels. Neither was he put in the position of having to refuse to testify against 'named' persons before H.U.A.C.. Still, he was blacklisted.

The stress brought about by his blacklisting proved fatal, Lee succumbing to the effects of hypertension on May 9th 1952. Wrote Ossie Davis, "Canada Lee couldn't find a job anywhere and died of a broken heart."

Although Smith's prose is described in Kirkus Review as being "pedestrian" and her approach to narrative as akin to "laundry listing", that is not enough to dull the power and the revelation of the story of this quite remarkable man.