A Night at the Fights Featuring Williams and Dunne 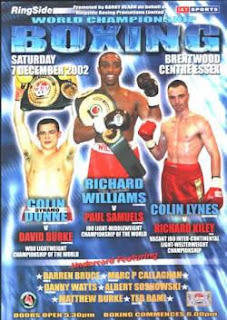 The outlying areas of Brentwood, a town situated in the English County of Essex, are composed of some of the most luxurious sets of real estate imaginable. It's occupants, upwardly mobile personages from the world of British show business (especially soap stars), footballers, merchants and assorted barons of villainy have tended to have their origins in the working class districts of East London; the sort of humble origins from which the likes of Richard Williams, Colin Dunne and Colin Lynes, headliners at the December 7th bill held at the towns International Centre, are striving to transcend.

But the ostensible devaluation of titles does not necessarily devalue the skill, courage and tenacity of effort that fighters are apt at demonstrating whatever the honorific being fought for.

For Colin Dunne, the Liverpool originated but London based, lightweight, praises are in order for coming back to fight an extremely competitive bout after enduring a disastrous opening round which saw him staggered by a hook delivered by David Burke, his rival and fellow Scouser. Praise too is due to one Paul Samuels, the Welsh thorn in Richard 'The Secret' Williams' side.

There was also atmosphere and passion on show with a high-spirited Polish contingent in town to support heavyweight, Albert Sosnowski in his bout with the Nigerian, Jacklord Jacobs and Piotr Bartnicki against the Essex based Darren Bruce, the Poles seemingly reliant on raucous songs composed by English and Dutch football supporters.

The Welsh support for Samuels was so intense that a cordon of security personnel stood in front of them alert to any eventualities while the baying and hooting from the supporters of both Merseyside rivals was reminiscent of recreations of the Parisian hordes who hung around the execution spots where the French Aristocracy awaited the attentions of the guillotine.

For Richard Williams and Paul Samuels, it was a case of unfinished business. Their earlier bout fought half a year earlier in June had ended in controversial and unsatisfactory circumstances. A technical draw was given after Richards sustained cuts above his right eye, which the referee ruled had being caused by a clash of heads.

The Welshman, onlookers noted, had been standing his ground well at the time of the stoppage. So it was unsurprising that he took to the initiative at the sound of the inaugural bell and pressed while the champion, compared to Michael Watson by Nigel Benn, was content to stand back and issue selective counters. Both this round and the second were fairly even and largely uneventful.

The first sparks appeared in the third when each man scored although Williams's punches appeared the more authoritative. Samuels, as is the ploy of those who have being genuinely rattled, shook his head each time Williams caught him and even took to speaking to Williams in the clinches.

But while Samuels chattered, Williams was beginning to take a grip on the bout, boxing confidently and assuredly. Indeed a series of sternly delivered hooks targeted at Samuels' sides brought large roars from the crowd -temporarily drowning out the vociferous support coming from the Dragon banner waving Welsh patriots.

By round five, Samuels was bloody mouthed but he took to the offensive and commanded the sixth, backing Williams up with sweeping hooks and a right hand and later wobbling him with a vicious combination. Although Williams stunned Samuels on two occasions in the seventh, a three punch combination by Samuels had him reeling at the rounds end.

However, Samuels was now breathing heavily; bloodied and weary, he showed remarkable resilience in not only continuing to remain upright but also by remaining a genuine threat when he pulled his resources together and surged at his opponent. Williams was content to box carefully until in the tenth he sensed an opening and caught Samuels around the jaw and face with lefts and rights. Samuels' legs caved in and the referee was quick to halt the proceedings.

The fight between Colin Dunne and David Burke was fast paced and intense, starting sensationally when Dunne's legs quivered after being caught by a ferocious hook. Burke chased after him, seemingly trying harder to push his opponent to the ground, as he was to punch him.

When Dunne did eventually spin to the canvas, it was correctly ruled a push. Dunne not only stove to overcome the effects of the damaging punch but also Burke's southpaw stance, which appeared to confuse him in instances.

In fact, it appeared that Dunne lacked the ability to think himself out of his predicament and reduced himself to attempts at head butting Burke -a veritable sign of a desperate fighter bereft of ideas. In the third a left hook from Burke as the referee broke both men sent Dunne down and Dunne was given a standing eight-count inspite of his pleas that he had slipped.

This incident, it would transpire would be crucial to the outcome of the bout since from here on the fight was fought evenly with Dunne bettering his foe at significant portions. While Burke snaked out a left, Dunne constantly dipped and weaved himself in close from where he targeted Burke's torso.

Amazingly, by the twelfth and final round, Dunne was continuing his remarkable impersonation of Henry Armstrong and looked like having staged a remarkable comeback before the officials decision announced that he had lost by a split decision -the disputed standing count having being the deciding factor.

It will of course be interesting to see a fighter like Williams matched against truly world-class opposition. He appears to be a competent boxer who executes the basics of his trade with guile and assurance. But there must be doubt as to whether he is the genuine article until the standard of opposition is upped.

In many ways, this sums up the state of modern boxing; who could imagine musing thirty years ago that a champion fighter is still largely unproven and will remain so until, if ever, the standard of his opposition is upgraded? The reality of the relationship between broadcasters such as the Sky group who televised the matches and boxing promoters is that bills are unlikely to be offered for public viewing unless a title is at stake.

The belts proudly displaced by both Williams and Burke after their victories could be disparaged as been bauble and the issuing bodies as jejune, yet in many ways it would be unfortunate to disparage the fighters who hold these belts.

Not after witnessing the way each man and his opponent fought.