Patriotism and Boxing: A Story of Saints and Scoundrels 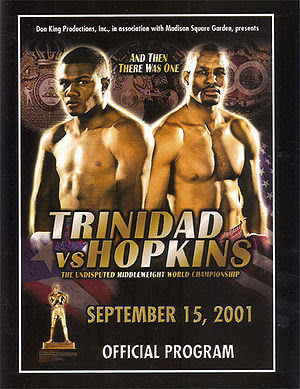 The passions evoked by the flag throwing shenanigans at the press conferences involving Bernard Hopkins and Felix Trinidad are of course not new to boxing as indeed it is not unfamiliar with the whole concept of sporting competition.

In patriotism we find mankind laden with a highly charged and combustible smorgasbord of elemental emotions encompassing love and hatred (love for your kind and hatred for his opponent) as well as hope and fear (visions of glory should your man win entwined with a doomsday-like foreboding should he lose). When combined with the definitive quality that boxing bouts produce in terms of providing a winner and loser, the consequences unsurprisingly are apt at producing utter mayhem.

The concept of national consciousness and even the instinct aimed at preserving racial or even ideological dominance have all played their part in some of boxing's ugliest moments.

Yet, there have been those moments of moral upliftment.

Consider the tale of Daniel Mendoza, the Sephardic Jew who is largely credited in boxing historiography as the progenitor of the concept of scientific boxing. His wins over Richard Humphries and Billy Warr in the 1790's simultaneously confirmed his possession of the English title (which in those days equated to the world championship) and gave the whole of European Jewry, constantly threatened and persistently ostracised, cause for hope, pride and glory.

Closer in time and still ringing with much resonance was the bout between Joe Louis the African descended American whose brutally efficient first round subjugation of the German Max Schmeling, a fighter who with hindsight was unfairly saddled with the burden of being the sporting poster boy advert for 'Aryan racial supremacy,' served as a powerful metaphor in regard to the impending global conflict between what were touted as the forces of freedom against those of totalitarianism. Louis versus Schmeling, a fight for the world's heavyweight championship, need we remind ourselves stood for nothing less than a battle between 'good' and 'evil.'

The theme of boxing and war interlinked famously and movingly in 1960s Africa. For those ethnic Igbos newly baptised into the rebel nation of Biafra which fought a war of secession against Nigeria, the fights of Richard Ihetu, the legendary Dick Tiger, were monumental events that enthralled an imperilled people and promoted national solidarity.

Many fight fans, except those of Panamanian nationality, will recall delicious feelings when the Irish featherweight, Barry McGuigan defeated Eusebio Pedroza, a great though aged champion. Coexisting with the charmingly good-natured Irish patriotic fervour was the symbolic transcending of sectarianism as McGuigan, a Catholic married to a protestant briefly, but touchingly united the troubled Emerald Isle.

But patriotic feeling has also served to create ugly moments at boxing matches. In the late 1960's for instance, Madison Square Garden provided the battleground venue for rioting Puerto Rican's indignant at verdicts going against their pugilist standard bearers. In May 1967, contingents from two New York City Police precincts were required to restore order after the mayhem that followed Dick Tiger's successful defence of his world light heavyweight title against Jose Torres.

I personally recall feelings of rage and sadness at the treatment meted out to Marvin Hagler at London's Wembley Arena in 1980 following his third round routing of Alan Minter in a world middleweight title contest. Members of the politically far right British National Front Party hurled racial epithets and bottles at Hagler before he could be formally proclaimed to be world champion.

What conclusions may one offer other than to say that patriotic fervour is a pretty potent stimulus; excellent petrol but a rather unreliable engine. The Trinidad-Hopkins bout has become important not only because of the fighting qualities of both men but also because the image of boxing stands to take a hefty battering in the court of public opinion should stoked up feelings of nationalism be unleashed by the frustration or elation of a section of supporters.

Whatever the outcome of this bout, let us hope that come September 15, cool heads will prevail.