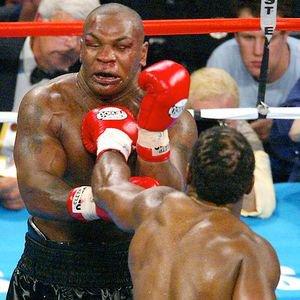 Memphis, Tennessee is a city that is rich in culture and history. It is the home of Blues music deity W.C. Handy and rock n' roll king Elvis Presley, both of whose legacies are preserved respectively in the garishly constructed tourist Meccas of Beale Street and Graceland.


The "Bluff City", a strategically vital plateau that overlooks the river Mississippi, has over the centuries formed the backdrop to acts of subjugation: the Chickasaw Indians conquered by the Spanish; the Spanish outmanoeuvred by the French; the French deposed by the English; the English overthrown by the Americans and the secessionist confederate states of the South overrun by the North during the American civil war.


Add to the list of vanquished that of Michael Gerard Tyson, in 1988 after his first round blowout of Michael Spinks, a candidate seemingly for boxing immortality and who in 2002 is the pathetically, washed up bum hammered to submission by the fists of Lennox Lewis.


Tyson, boxing's 'enfant terrible,' the iron wrecking Ghetto-Whopping Cyclops, Gog and Magog personified, arguably has managed to concoct an aura of such resounding negativity that has matched and oft times even eclipsed those periods of unpopularity that bedevilled figures like Jack Johnson (conduct challenging the social order of the time), Dempsey (draft dodging allegations), Sonny Liston (Mob associations) and Muhammad Ali (membership of a racial separatist organisation). June 8 represents the final stanza of what many have viewed as the inexorable decline of Tyson the fighter.


The frankensteinian creation of the certifiable but venerable figure of Cus D'Amato; the magus' final bequest to the boxing world was supposed to be a composite of the accumulation of the qualities of sixty years heavyweight champions: the robeless, sockless black garbed entrance was supposed to convey the down-to-earth, no frills pragmatism of Jack Dempsey as indeed was the fighting style which was swift movement of head allied to full bloodied delivery of megaton packed punch combinations.


D'Amato deliberately inculcated an awareness and indeed an almost scholastic knowledge of past fighters through hours of studying reels of fight movies. Tyson may have alluded to the influences of Louis, Marciano and Ali but he was mostly about emulating Dempsey. And in terms of viewer excitement and box office receipts generated he did appear to be the Dempsey of his age. But that is as far as it went.


Tyson began to self-destruct with increasingly erratic behaviour and somehow began to be sucked into a maelstrom of mishaps: street fights, allegations of persistently lewd conduct, financial overindulgence all culminating in a morale-sapping divorce and later on a criminal conviction for rape.


It did not help that he was left unprotected among a miscellany of predatory leeches grasping for pecuniary leverage and ill advised about the ways and means of navigating his way in life. He has, as the press conference to announce his bout with Lewis then scheduled for New York demonstrated, at times appeared thoroughly unrestrained in his behaviour and lacking in fundamental values of human deportment.


Still the apparent projection of confidence within Tyson as he hurled a series of bombastic verbal taunts and curses at Lewis could not prepare many for what turned out to be an uncompetitive bout.


Tyson started the fight promisingly enough by stalking Lewis. He appeared to be up for it as purposefully, his eyes trained on the champion, he marched forward seeking to blast away at Lewis' suspect chin. Many who predicted a Tyson victory perhaps mistakenly harkened to the halcyon days of his defeats of the likes of Tyrell Biggs, Pinklon Thomas, Michael Spinks and Carl Williams.


That Tyson was never seen post-Buster Douglas. When he beat Razor Ruddock on two occasions he did not utilize his D'Amatoan bob and weave skills and intelligently constructed body attack. Instead he appeared increasingly to rely on brute strength and notoriety.


Arguable, his skills were already in serious decline before he was sent to gaol for the rape of Desiree Washington. Added to that is the fact that Tyson entered the ring reportedly having fought only eighteen rounds in five years, a distinct disadvantage when considering Lewis' appearances in title fights over the same period. Tyson was totally bereft of the skills that he so menacingly employed in the 1980's.


Gone were the strategies of swift movement rolling the head from side to side followed by the swift instep and hip swivel that was the precursor to a thunderous barrage of hooks to the pit of his opponent's stomach. Instead we saw a Tyson who was a shell of his former self -robbed no doubt by years of ring inactivity and extra curricular over activity.


Never possessing a 'pleasing-to-the-eye' style of fighting, Lewis pushed out his straight left jab and unceremoniously clung on to Tyson using a python like method to constrict the former champions movements. Lewis then backed this up by leaning in with the full weight of his seventeen stone frame a ploy, which must have contributed to the steadily weakening state of Tyson.


If Tyson won the first round through his persistence in moving forward and clung onto a precarious state of parity in the next two, it can be safely asserted that from thence he was no longer in the reckoning as gradually his face became increasingly misshapen, as Lewis' jabs connected with monotonous regularity bloodying his nose and inflicting lumps on either side of the forehead.


During the intermissions Tyson appeared to be in obvious pain from the work done by his seconds on his bleeding nostrils and lumped features. The ministrations from his corner men for him to summon up one last effort to deliver a knockout blow were met with the words: "I can't."


It was clear that it was only a question of time before Lewis would bring to bear the force majeure to knock him out. Tyson plodded forward all the time receiving the most comprehensive beating administered to him in his professional career. The decisive blow that turned Tyson limp was followed by a shove from Lewis that deposited him onto the canvas.


What to make then of this tumultuous career of an orphaned, street hardened Brooklyn youth, ostensibly rescued by the efforts of an ageing trainer only to fall to the depths of personal and professional humiliation?


Although Tyson achieved the distinction of being the youngest ever world heavyweight champion as well as being one of the most feared and entertaining, his eventual legacy will be one clouded in the mists of unfulfilled destiny.


It will be tempting to see his early victories while dominating the heavyweight ranks as insignificant peaks and the losses suffered to Holyfield and Lewis as confirmation that he was average and overblown, seemingly thriving on an aura of invincibility that was thrashed first by James 'Buster' Douglas and then by Evander Holyfield and which now has been firmly dismantled by Lewis.


The evidence appears compelling; Tyson never beat any of the talented luminaries of his generation Holyfield, Lewis or Bowe, He may be remembered as a bully, granted an above average fighter, but a bully none the less who got his comeuppance in the 'Bluff City.'


Yet there will be those who will lament the defeat of Tyson the fighter if not Tyson the person. For the Mike Tyson of the early part of his career appeared to be a gift from the gods.


A kid who fought like the heavyweight champion should fight: aggressively, powerfully and skillfully. Who battled with a coldly, calculating rage, provided knockout entertainment and who with his knowledge of boxing history projected an endearing sense of his continuing a noble tradition of the fighting man.


Sadly, he will be remembered more for notoriety and less for nobility.

Posted by Adeyinka Makinde at 00:04