Pug of Ages Weep for Me 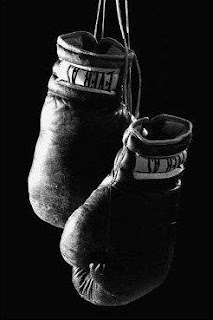 The saga of modern boxing, the sport of sanitised brutality continues into a new century. This in itself is something of an achievement, for many powerful interests have over the preceding decades taken the view that the existence of the sport, is inherently antithetical to the values held sacred within a functioning civilized society and still agitate for it's obliteration. The industry is thus forced time and again to justify itself, to revalidate and to campaign for its perpetuation.


In every succeeding era, boxing, to borrow an overused phrase appears always to be on the ropes, absorbing each body blow tossed its way and suffering from a self inflicted cancer of corruption and fighter exploitation. And you have to hand it to the game: Against all the odds it continues to survive and when in the midst of a dollar raking, record breaking super bout it tends to muster once in a while, it may give the impression to the unerring observer of an industry that thrives.


But, peel away the façade of money and glamour, and one sees it for what it really is: an unholy alliance of interdependent groups of sanctioning bodies and promoters who wield power and garner profits at the expense of many fighters.


It is perhaps instructive to look at boxing and boxers over a time scale. The chronology of time and the use of hindsight allows us to assess its capacity or lack thereof, to evolve. For if we are to be in a position to judge on it's progress and development, we need to set out the themes and structures in its past to use as points of comparison to the present state of the game. The sources of monies involved, the competence of its organisation as well as the influences of race and class.


Boxing has and always will be a passionate game, a spectacular visual display of high drama. Its rituals of ring entrances, fighter introductions and instructions bear the unmistakable traces of the theatrical.


But more than being a vehicle for mere theatre (although it has on many an occasion descended into the farcical), it is an all too real and brutal stage. It is show business with an emphasis on bloody wounds and concussive blows (the 'show' aspect) and a business apt at leaving a trail of broken bodies and fractured spirits.


This was the case at the beginning of the modern era which saw transition of the game from bare fist fighting to gloved-up Marquis of Queensbury principles and is still the case today. But in the gifted fighter of the kind that Willie Pep was, that Sugar Ray Robinson was and Roy Jones is, we see the beauty of pugilism. We are seduced into a comfortable state of awe and admiration for these fighting types as indeed we are by the cruder art of a Duran or a Tyson.


Boxing is about money. Always has been. The feats of entrepreneurs of the ilk of Tex Rickard in attracting copious amounts of money bear fitting testament to the spirit of laissez faire economics. And while the sources of this money may have changed, the underlying drive aimed at reaping the top dollar continues.


The only problem here is that much of the "risk" is still on the boxers side. Promoters will general fashion a financial safety net from first obtaining financial guarantees from television or cable networks before embarking on the fight project.


While fighters may be guaranteed purses before entering the ring, they are often times short changed by the devious practice of having to deal with promoters who may also play the dual role of manager and promoter or who certainly have a strong influence on the manager.


The problem with boxing is that it is an unreconstructed aspect of the capitalist system. It is basically unregulated and this has had dire consequences on the fortunes of its primary participant: The boxer.


The monopolistic tendencies of the International Boxing Club (IBC), who had inherited the powerful position of Mike Jacobs' Twentieth Century Sporting Club, may have been ended at the end of the 1950s by the application of anti-trust legislation. But it appears to have been succeeded by an equally pernicious arrangement of the splintered sanctioning bodies.


While the IBC era, marked by the involvement of organised crime figures like Frankie Carbo and 'Blinkie' Parlemo encouraged an atmosphere of matching fixing, so the modern set up gives sustenance to a culture that permits the fixing of ratings.


The rewards to the top echelon fighters have always been great. For the successful fighter, boxing in its most positive sense remains a valid means of social mobility and of personal redemption. It has continued to serve as route to fame and riches for the delinquent urchin of the mould of say Floyd Patterson. For Bernard Hopkins, a former resident of a notorious penitentiary, boxing proved literally to be a life saver.


But for every fighter who appears to have achieved economic security and purpose in life, there are many more, much too many to count, who have slid into indigence and poor health.


While, one may strongly argue the case for individual responsibility for one's destiny, this may be too harsh a standpoint, given the purported calibre of many of their adviser's who fail to set up the requisite trust funds, health and miscellaneous insurance programs on behalf of their fighters.


Instead we find these advisers frequently situated in unconscionable situations involving conflict of interest and outright theft. Thus in one sense the ill-advised, blood sucked boxer of today is in no better position than his predecessor of say the time of Beau Jack and Ike Williams, two fighters who lost much of their purses to unscrupulous managers.


The story of the boxer as conveyed by the popular tune composed in the 1960's by Paul Simon, is not a story that is "seldom told." He is an ageless lament replayed in the tales of Beau Jack, Randolph Turpin, Kid Gavilan, Wilfred Benitez, Iran Barkley.


Sing it as an old blues vehicle as Sonny Liston once foretold or compose it in the style of a Tin Pan Alley weeper, the result is the same a bitter-sweet reflection swathed in melodies of melancholia.


Death is an ever present threat. The codification of rules, the advances in medical care and the shortening of rounds cannot remove this. Thus the modern fighter like his forebears enters the ring knowing consciously that it may be the last day of his life.


Jimmy Doyle knew this as did Johnny Owen and Benny Paret. Yet, it is painful to note that in the year 2001 Beethaven Scottland, who ought to have expected a greater level of care and protection given the lessons 'learned' from previous tragedies succumbed to what appears to many to have being a needless and preventable death.


The boxing game remains a turf in which societal racial attitudes are played out. The ranks of boxers are populated in the main by those of African-American and Latin lineage. The quest for a white hope that is encapsulated in the personage of a white-hued Caucasian bearing the potentialities of becoming the world heavyweight champion still subsists lurking in the minds of fight fans, a large segment of who are White.


Those familiar with boxing hagiography will pinpoint the era of Jack Johnson as period during which this form of tribalistic bias took root. The long and hard fought for co-option of blacks into the mainstream of American society arguably had a helping hand from boxing notably through the honourable personage of the 'Brown Bomber' Joe Louis.


The diminution of white fighters has intensified such yearnings for a white champion manifesting itself in the fictional Rocky movies and in real life led to the Gerry Cooney phenomena that culminated in his unsuccessful bid to oust Larry Holmes from his championship throne.


Today, it has been strongly argued by some that many white North American heavyweights, although severely limited in the skills factor are nevertheless pushed well beyond their justified rankings in order to satisfy this misguided tribally motivated lust.


Moreover, the introduction into the professional ranks of pugilists from the Slavic lands has provided those with visions of a white heavyweight conqueror with renewed hope. While it would perhaps be overly idealistic to expel such instincts from the human make up, the point is that fighters should not be given unmerited advantages because of the paleness of their skins or be granted higher ranking merely because they are well supported by sections within the Latino community.


The thing that is most striking about the fight game is how little things have changed for the majority of fighters who toil at the lower rungs of the game and who end up poor and in ill health. And this still is the case for many of those who competed at the higher echelons of the game.


Boxing is badly in need of reform. The pre-eminence of the United States in the sport means that such reform needs to be initiated and applied within the country. Efforts made to enact legislation, court victories by fighters successfully suing this or that sanctioning body, the recent probe in to the IBF while laudable are with all issues considered merely piece meal. What is needed is a comprehensive and radical package of reform fashioned by the combined views of fans, journalists and interested bodies.


But most important of all, are the fighters; particularly those who are the champions of the day, who ought to be prepared to act in unity by giving legitimacy to a new order. Until this happens, the time for administering the obsequies at the industry's funeral will surely be at hand.