A Funny Thing Happened on the Way Through Customs 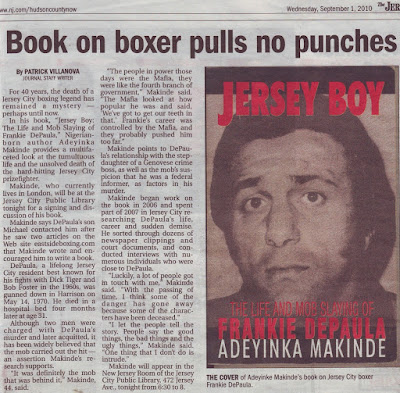 The Jersey Journal feature on my book "Jersey Boy: The Life and Mob Slaying of Frankie DePaula.

You can’t be sure during these days of heightened security at airports just what will happen.  For me, departing from Newark Airport Sunday past would have been extremely frustrating in a different context.

First, my flight to Washington D.C., scheduled for 2:34P.M., was delayed until it was apparent that I would not be able to make the connecting flight to London later on in the evening. So kind chaps that they are, United Airlines transferred me to a Continental Airlines flight which would be flying directly to London and arrive at approximately the same time I would have arrived with the previous arrangement.

But after going through the process of being re-ticketed and having to collect my baggage in order to complete the check in process with Continental, another hiccup: The Continental Airlines flight was announced as being delayed for an uncertain period of time which turned into a 3 hour delay.

It meant that I was kicking my heels in Newark Airport for a total of 8 hours.

What made this bearable was that I was in no particular rush to fulfil any engagements in London. And as it turned out, I would arrive just before the strike by London Underground (Subway) workers which commenced later on Monday afternoon.

I was in a good mood and simply spent my time doing some tourist shopping, eating and reading a copy of Tom Folsom’s The Mad Ones’ the book on ‘Crazy Joe’ Gallo.

My good and calm grace had been aided by what had happened when I first went through customs. The security X-ray had detected my 150ml of contact lens solution as well as my over 100ml can of shaving foam. The Latino guard let me keep the solution but kept my almost empty shaving foam can behind –a decision for which I felt not the slightest bit aggrieved.

While all of this was going on, I decided to ask the punctilious security man whether he read books. He answered in the affirmative. I then inquired as to what kind.

He answered: “Stuff on terrorism. Wars and military things.”

“Terrorism”, I replied. “Would you be interested in reading about a tough guy who ‘terrorised’ other tough guys on the streets of Jersey City”?

“What’s his name?” he asked

“Frankie DePaula,” I came back

“I think that I heard of that guy before” he claimed, “wait a minute. I wanna show you something”.

He went to his work station or locker or whatever he has.

When he came back, I received a wonderful surprise. He unfolded a cutting he had recently made of an article he had seen in the Jersey Journal.

“Is this the guy?” he asked

It was an article from last Wednesday’s Journal headlined: “Book on Boxer Pulls No Punches”.

“Really?," he said, “I’m from Jersey City. I used to box. I was a silver medallist in the New York Golden Gloves”

Filipe Lopes often has to cut out and save newspaper articles because of his busy working schedule.

“You know something?” he said to me, “Your book is going to be BIG. If I’ve seen that article and saved it; trust me, it’s gonna be a big thing.”

You want to know something folks? I’m still in a good mood...

Posted by Adeyinka Makinde at 12:50