A Night at the Fights with Wayne ‘Mad Dog’ Elcock 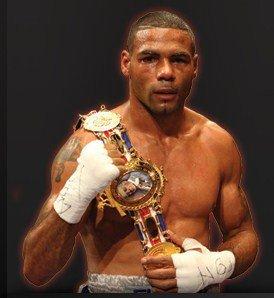 The education of a promising professional fighter is always something to behold. For the manager it is the arduous process of ‘bringing along’ his charge at the right pace, as the potential opposition is assessed and scrutinized to present the appropriate level of competition.

Stagnation of the boxers skills beckon for those who are overcautious while defeat is the certain consequence for the over ambitious. As much an art as it is a science, the choice of selection says much about the intuition and level of expertise of the manager doing the selecting.

On Saturday, February 15th, at the Wembley Conference centre, Wayne Elcock, a powerfully built middleweight managed by Frank Maloney will have learnt much from his tussle with the Belarus originated Yuri Tsarenko.

Once a semi-professional footballer, Elcock has only recently given up his job as a telecommunications engineer in order to devote his energies totally to the sport. Dubbed "Mad Dog," Elcock has been compared to explosive punchers of the ilk of Nigel Benn and Joe Calzaghe. That Maloney intended this to be a ‘great leap forward’ is attested to by the selection of Tsarenko, a fighter moulded in the granite hard intransigence typical of many a fighter imported from the Slavic lands, as well as the decision to schedule the bout for ten rounds.

A brief period of observing Elcock reveals his ‘Mad Dog’ moniker to be somewhat misplaced. He is an aggressive fighter, true, but his is a schooled aggressiveness, not at all unbridled or uncouth. He has quick hands and many times would move to his opponent not with a jab or succession of jabs but with a right, driven hard against the sides of the Belarusian and followed up with a left in the direction of the head. Even when stepping backwards, Elcock looked deadly, making Tsarenko miss and swiftly moving forward to punish him.

In the second, Elcock concentrated more on utilizing the more orthodox jab followed by combination attack. During one such onslaught, Tsarenko’s left cheek opened causing the referee to temporarily halt proceedings for the wound to receive treatment. The subsequent chase by Elcock however yielded no knock down. Indeed, while Elcock, ably encouraged by Maloney’s shouts of ‘Good shot," scored, Tsarenko’s boxing became more assured. The look on his face showed anything but fear and he moved towards, not away from Elcock.

As the end of the fifth approached Tsarenko was surprisingly still in the game a combination of his resilience and Elcock's ineffectiveness. Indeed, in the sixth, Tsarenko was not merely surviving but actually prospering catching Elcock with a blow that pushed Elcock's head backwards. Encouraged by these successes, Tsarenko upped the pace absorbing Elcock's punches with apparent ease and coming forward.

This proved disconcerting to Elcock to the extent that appeared to forget to use his jab. So bereft of idea’s was he that ex-heavyweight champion Tim Witherspoon sitting ringside purported to remind him of the basics: "Double the jab up Wayne….two jabs Wayne…then hit him with the right."

Things went from bad to worse. Elcock was stung by a short right thrown to the side of his face and was fighting for his survival as with Tsarenko, hoping to land the coup de grace, followed in pursuit.

Frantic messages from around ringside implored Elcock to keep his hands up and to get on his 'bike'. And survive he did. In the final round he moved around keeping sufficient distance between himself and Tsarenko with a jab. The referee scored Elcock the winner by ninety-eight points to ninety-three.

In the main bout of this Frank Warren promoted event, Southern Area Lightweight champion Graham Earl survived an intense, give and take first round brawl with Steve Murray, to knock his opponent out in the second of a scheduled 12 round bout, an official elimination contest for the British Lightweight championship.